Things have happened since I last wrote anything here.


I’d meant to write a whole load of stuff about the teddy bear that almost had a name to die for. Mostly it just left me feeling, again, what a terrible place society can become when religious fundamentalists take control. I think it’s almost inevitable when people with power are convinced that they know what the “right” way to live is and then decide to start making sure that everyone else lives the “right” way, whether they like it or not.


A couple of Saturdays ago night I attended my first ever Fetish Fancy Dress party. Left me wondering why it has taken me so many years to experience such things – and also glad that, at long last, I have gotten round to it.


In a lot of ways it was just a party. But for me it was special.


I had intended just to make up and dress fairly normally ... well normally for a t-girl anyway. But the only other person that I knew that was going had mentioned she was dressing as a French Maid. So, on the Saturday afternoon I went shopping in search of something a little more fetish-y. En-route I stopped in at Evans – a shop that caters for larger sizes. They sometimes have shoes that fit me. They still had some sales items in and I found 3 pairs of shoes for a total of £20. And they fitted. I don’t think anyone even noticed me trying the right feet on – only the right feet are left out on display in most shoe shops in the UK. When the shop assistant collected the left feet from the storeroom she smiled and asked if I wanted to try them on. It was a friendly sort of smile. I explained that I was pretty sure that the left feet would be fine as well. My wife was a little gob-smacked when I showed her the shoes. Why on earth would anyone want to buy three pairs of shoes? I have no idea at all why ... just seemed to good an opportunity to miss.


After that I called in at Ann Summers shop to take a look at what was on offer. Of all the available options I most liked the school dress. But what size? When an assistant asked me if she could help I just asked about sizes. So ... she asked ... “what size is she?” I just said ... well ... I’m a 16 or 18 (UK that is) 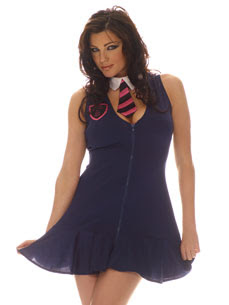 and explained about the party. She thought it was cool. I asked about trying it on but there was someone in the changing room. For a long ... long time there was someone in the changing room. She (and I think a he as well) seemed to be trying out the entire stock range of the shop. They were really helpful though and said if I came back a little later they would make sure that I could try the dress on. And so ... the result is as in the picture.


Well ... ok ... yes ... apart from the face. Oh, and the boobs. My arms are bigger also. But people do compliment me on my legs J.
The panties say “Spank me” on the back. I know the picture doesn’t show that, so you just have to take my word for it. The lapel badge says “Spank Academy for Bad girls”.
When I actually dressed for the party I played it cautious and wore other stuff over the top. I wasn’t sure how far I would have to walk from the car – and the dress was even shorter than it looks in the picture.

The party was cool. I only got spanked a few times – and just playfully. I met a whole load of very nice people. There were maybe 5 t-girls there. A fancy dress headmistress, two real-life dominatrices (is that the correct plural), and a whole lot of people in various mixes of leather and PVC.

A little later in the evening we spent a few hours at a pub in the centre of town. Not so very long ago the thought of this would have been ... well ... unthinkable. The locals were a little surprised ... but very friendly and even complimentary. One guy, looking at a lady dressed in red leather, said to me ... “I wouldn’t mind being spanked by her”. And she wasn’t the dominatrix! We chatted a little with a lady and her husband that were just passing through on their way back home. And to a few other people as well. It does seem that wearing makeup and a dress means you get to talk to complete strangers in a way that hardly seems to happen when dressed as a bloke. It’s strange –once upon a time I would have thought that people’s reactions would have been the exact opposite.