Saturday 17th was another chance to go walkabout in Windsor.

One of the challenges of doing this as a tgirl is allowing all the extra time that is needed for makeup and selection of clothing.

The makeup actually begins on Friday night with nail polish. Sally suggests I go pink. And so I do. For a while. Three coats of Urban Princess. Then an accidental argument … my thumbnail versus a door handle … changes everything. The pink stuff taking for ever to harden. So off it comes. To be followed by two coats of bright red Hot Gossip and one of 3 in 1.

At round about 9:30 on Saturday morning I begin the final preparations.

I’m still not skilled enough with makeup to manage much in the way of subtlety. I know that there are different looks … nightclub chick … everyday smart … casual … and all the in-betweens as well.

I just go for a little less foundation. Paler eye shadow. A little less eye liner and mascara. Pink lips instead of ruby red. Thoughts of Urban Princess versus Hot Gossip momentarily pass through my mind.

I select a bra that isn’t front fastening. Having it come undone in the middle of Windsor would be way more inconvenient than the time that it did at Pink Punters. I have discovered that when your boobs aren’t attached to your body it’s really important to have a bra that is unlikely to pop open. The bra is black – one of a pair that I bought at Peacock’s in Bristol - £6 for two.

As I put them on I know they don’t feel anywhere near so good as four and a half inch stilettos. I know, also, that in an hours time I’ll be glad that they are nice and low.

I’m all ready by about 10:50. It’s kinda nice to just potter around the house and relax for a few minutes.

Sally has been busy all morning doing stuff in the garden.

I’ve managed to train her into realising that Andrea’s nails are way to delicate for such tasks. But I do make the coffee.

Tina arrives at about 11:30 just as Sally heads out to play golf.

The comic irony of the situation isn’t lost … wife out on the golf course … hubby out shopping in a skirt.

After applying a few finishing touches we head for the car.

There are a couple of neighbours chatting a few houses down the street. I resist the urge to wave and say hello. I also resist the urge to run back to the house. I have no idea if I am recognised. If I am then I am. Mostly people seem not to notice. But I would be even less noticeable if I were shorter than six feet tall.

Tina drives and mostly I remember to say which way to go.

Arriving at the car park in Victoria Street we pay at the pay and display meter and head off for the town centre.

Alas, Shoe Fetish is no more. It’s been replaced by a shop that sells motor scooters.

There are one or two quizzical kind of looks as we walk past people. It must be our husky voices.

But no one pulls faces or passes comments.

Gazing into a few shop windows we wander up Peascod Street from the St Leonard’s Road end.

Turning into King Edward Court we go into the British Heart Foundation charity shop and take a look around.

I see a white handbag – I have white shoes but no white handbag. It’s in excellent condition and a snip at £2,75. The lady at the till doesn’t really look at me as I pay.

We pay a visit to Fenwick’s. Then Boots, Daniels and Marks & Spencer.

Then on to Cafe Rouge. The place is pretty busy. The staff are, as always, very helpful and friendly. The other diners pay us no attention.

I order a Hoegaarden beer, Tina a lemonade. The food arrives very promptly and is excellent.

We chat about girlie kinds of things.

The waitress drops by … “Is everything alright for you, ladies?” It makes me smile.

It’s then a walk along to the castle and a photo opportunity or two. 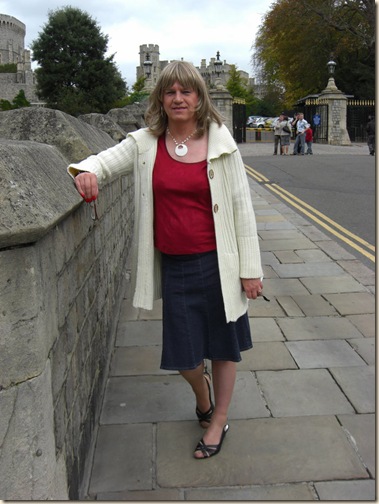 As I pose a little and Tina juggles two cameras a group of ladies walk by.

“Would you like me to take a picture of you both?” asks one of the ladies. We gratefully accept the offer, and she takes a picture with each of the cameras. 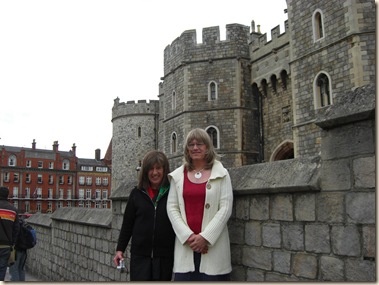 Then on down to the riverside. Tina changes her boots for a pair of flat shoes.

We should have brought some bread for the ducks and swans. 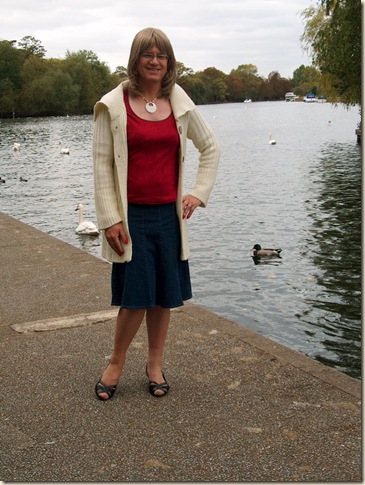 On the way back to the car park we call in at WH Smiths where Tina buys a newspaper.

As we stroll back down Peascod Street a man approaches us.

“Is that your real name?”

“Is that your real name?”

“Well, I’m afraid that I have to tell you that you’ve exceeded the local limits for looking cool and being hip whilst out in public. So I’m going to have to ask you to pay a voluntary fine as a penalty.”

Of course, we are smiling well before this.

The man’s eyesight is, of course, immediately suspect.

Actually he is a member of a Hare Krishna group raising money to help support homeless people.

His western name is John … his spiritual name is much more complex.

We make a donation and he gives me a booklet … pink to match the colour of my lips he says.

“Do you have blue ones for boys?” asks Andrea.

Back to the car and home. 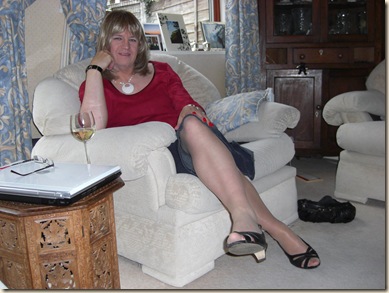 Each little trip out helps me feel more relaxed than the last time.

I have the feeling that Windsor town centre is a good and relatively safe kind of place for a transvestite to wander around in. People manage to “read” me without a lot of difficulty. But that doesn’t bother me really. A thing that Fiona Floyd shared with me several years ago has influenced my feelings on this. As Fiona said, “I’m not a girl, I’m a transvestite. If someone points a finger at me and says ‘Hey that’s not a real girl … it’s a tranny’ then it’s not a problem really … that’s what I am.” I feel the same way.

I think the centre of Windsor is maybe this way because people don’t have problems with strangers and off-beat people. The town relies heavily on tourism and really can’t afford to get overly upset about issues of gender or race or a whole range of other things.

One day maybe residential areas that don’t rely on tourism will get to see people as being people.