More from Matthew and the Pickiness of Believing the Bible

It’s been a long time since I looked at Matthew Chapter 1.

But here goes with chapter 2.

This talks about wise men visiting the place where Jesus had been born.

They travelled from the east to Jerusalem and asked where they could find the king of the Jews who’s star they had seen.

This upset King Herod and the people of Jerusalem.

Herod seems to work out that they are looking for the Christ, God’s annointed one, and decides to to take on God. So, I guess, Herod either didn’t really believe in an all-powerful God or he was a fool.

The religious people expected the annointed one to be born in Bethlehem. But not any time soon, I guess.

Herod seems to be happy to tell lies … though maybe he told the lies because he felt more frightened and threatened than happy.

The wise men follow the star until it stops over the house where the annointed one is. No mention of a stable. And it was an unusual star to be able to guide them like that.

They give their gifts and don’t tell Herod where they found the child because of a dream.

Another dream and Joseph, Mary and Jesus head for Egypt.

And then Herod has all the 2 year old and younger children … boys? … in and around Bethlehem murdered. It seems that this would likely have been twenty to thirty of these.

There are things here that surprise me.

The way that dreams are so important.

The death of innocent children.

I read a little additional background here. This says some odd things and makes some illogical assertions. And is biased in a different way than I am. It also includes the following awful statement:

In Deuteronomy 17, God commands his people to execute all astrologers by stoning. Jean Dixon wouldn't stand a chance in such a theocracy! The fact that she--and others like her--are so comfortably tolerated--even well respected!--in modern America ought to show us that the U.S.A. is a post-Christian country--at best . . .

Makes me glad that the author isn’t a man or woman with any real power and also glad that the USA is post-Christian. I’m certainly not a reader of stars, but stoning seems on the extreme side.

It makes me wonder about the kind of person that can think that kind of stuff and write it. The stuff is awful.

And this leads me on to memories of when I’ve heard people say something like “it’s not what I think … it’s the Bible that says it … so that’s what I say as well.”

Tonight Sally and I had a meal at Cafe Rouge and talked a bit about this. I mentioned my new perspective on life … about it not being just a lot of black and white issues … and not just shades of grey … but a whole spectrum of colours. She asked me if some people wouldn’t say that not having definite black and whit views was some kind of a cop out.

But thinking about it, it seems much more of a cop out to say “this is the way it is because the Bible says so” without taking the time and trouble to think and feel about an issue.

I just discovered this: 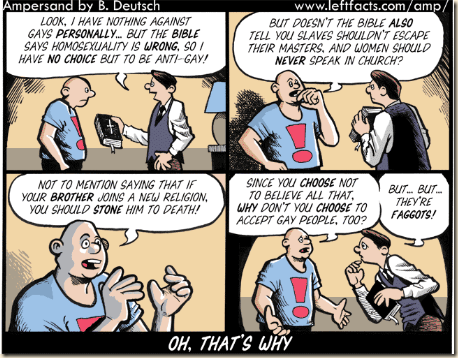 I discovered it here.

I don’t agree with the all the sentiments expressed at the web site, but there’s more than a grain of truth expressed in the cartoon. We are all picky about what we believe and why we believe it.

The original of the cartoon is here.

I don’t think that the second chapter of Matthew’s gospel is something that makes it any easier to be a believer. I’ve heard it said that Matthew’s gospel is written especially for a Jewish readership … hence all the references to fulfilled prophecies from the Old Testament. The first two chapters seem to fall into that kind of category.