Last night was a regular Surrey Swans get together. It was different in that it was actually warm enough to sit outside for a while in the early evening.

This did pose some challenges.

Four of us were sitting at a table. Myself, Laura, Chelle and Brenda.

We struggle to see each other. The sunshade / parasol is down and positioned right between us.

Then, after a short struggle.

“Maybe it would be easier to just put it up” says Brenda.

At this moment Andrea loses interest in the parasol and catches the boob as it slides out from under her blouse.

The opening of the parasol is completed with an upturned silicone boob sitting on the table.

As I slide it back into place it reminds me of a joke I first heard as a schoolboy. I share it with the others.

"A friend placed his left hand on his chest and solemnly declared ‘You know, sometimes I feel a right tit.' "

Rozz is serving drinks for the night. It’s really nice to see her again.

Part way into the evening Claire introduces herself.

It seems that in the near future she’s running a lingerie sale kind of event at the pub as a charity fund raising event. Mike, who runs the pub, had mentioned to her that we might be interested in the lingerie. So she asked if we’d be interested in taking a look at some catalogues that she had brought.

Oh and the lingerie as well.

Things were then quiet for a little while as people studiously looked through the catalogues. 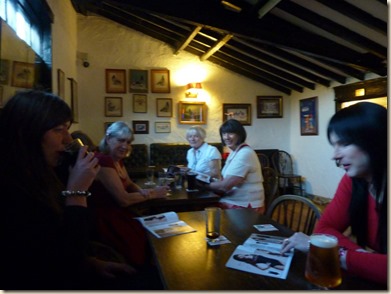 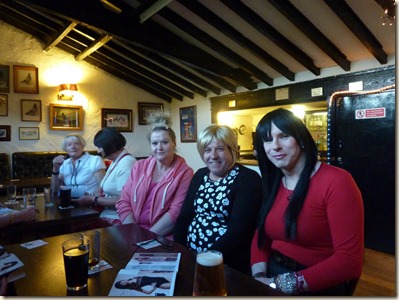 The pictures were taken just before the rack of lingerie was assembled.

It was really nice to meet Claire and she was really helpful to everyone. I think a few people had checks on bra sizes.

On checking with Emma, it seems that the first ever Surrey Swans meeting was in September 2003. So in September 2013 we’ll be 10 years old. That’s cool.