We recently spent four days in Rome, doing the regular tourist kind of things. I was a really great time.

At the Coliseum there was an exhibit about the emperor Constantine which mentioned the Edict of Milan which was drawn up 1,700 years ago in the year 313 AD. It includes this kind of stuff:

Therefore, your Worship should know that it has pleased us to remove all conditions whatsoever, which were in the rescripts formerly given to you officially, concerning the Christians and now any one of these who wishes to observe Christian religion may do so freely and openly, without molestation. We thought it fit to commend these things most fully to your care that you may know that we have given to those Christians free and unrestricted opportunity of religious worship. When you see that this has been granted to them by us, your Worship will know that we have also conceded to other religions the right of open and free observance of their worship for the sake of the peace of our times, that each one may have the free opportunity to worship as he pleases; this regulation is made that we may not seem to detract from any dignity or any religion.

There are, of course, a lot of potential reasons as to why this religious freedom was being offered to people within the Roman empire. It’s strange though that, 1,700 years later, there are large chunks of the world that don’t do this.

There seems to be an almost inevitability in that wherever religions, of any type, gain a position of power then members of other religions end up being persecuted.

I remember many years ago being at an event where Tony Campolo was speaking. He said that he thought that the only churches that had never gotten heavily into persecution were the ones that had never had any power.

On another day, sitting in St Peter’s Basilica I was left wondering if it was the kind of lace that Jesus would have spent much time in.

Sitting in a metro station I watched a video featuring two match sticks in bed. I’ll leave you to work out what the video was advertising.

I still find it strange that the churches are full of nude statues and paintings, but very fussy about bare shoulders and legs. It’s quaint that most of the nude statues in the Vatican Museum have been given plaster coatings to protect their genitalia and our modesty.

There were many very young looking priests around Rome. I’m not a psychologist or psychoanalyst. I don’t know if the sexual needs that I have are similar to those experienced by other people. But my guess would be that putting men into positions where they are forced to repress whatever sexuality they have, is a recipe for disaster.

And wow. Guess what?

Speaking of nude statues. I kinda liked this one: 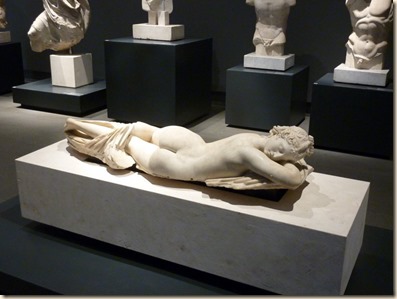 You need to see her from a different perspective to see what makes her special. 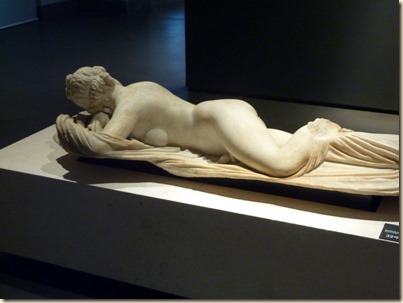