A night with the Swans

Brenda was passing out a few envelopes to people.

Being a little nosey, I ask Tina what’s it all about.

“I asked, but didn’t hear back yet.” says Tina.

“They look best on your head” contribute several people.

“On your own head be it” giggles Laura.

The consensus is that the hats are optional.

The theme for the evening is School Uniforms. There are over 20 girls in attendance, with about a third being dressed in a manner befitting the theme. 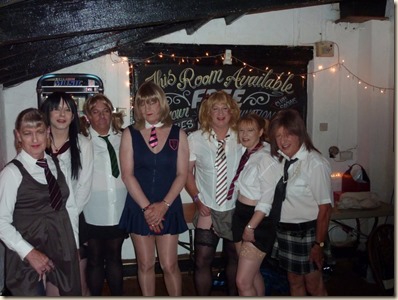 I don’t often get a chance to wear my Anne Summers school uniform, so the evening is a special pleasure.

“And are you wearing the Spank Me’s?” asks Laura.

Whilst collecting money for the raffle tickets, Laura proves to the whole world that indeed I am: 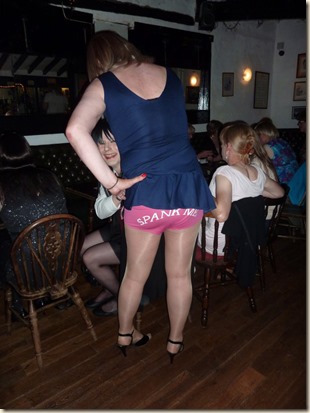 I did survive the evening, though, without being spanked at all.

And no, I’m not going to ask if my bum looks big in them.

Claire had organised the school examinations for the evening.

During this we discover what a bumbershoot is and by about 10:30pm we each wish that we had one.

I take a guess at the band that was named after the volume of semen produced during an average male ejaculation and get one. A point in the quiz that is – what else did you think I meant?

In fact, it seems that the whole thing is a myth. 10cc were really named after a band that Jonathan King dreamed about. Otherwise they would have been called somewhere between 2cc and 5cc. 10cc would have been a definite case of hyperspermia.