I described the the first two days of filming here … along with how it came about and what it’s about.

The rest of the filming happened at the Surrey Swans meeting on Sunday November 24th.

The meeting was unusual in several respects.

There were over 20 people there which was great.

There were four new people – Saffy, Gina,Carole and Louise – which was fantastic. It was great to meet them.

There was also the film crew, which was unprecedented.

The crew consisted of James, Sinead, Vlad, Lexie and Xander from the University for Creative Arts, Farnham. They are making a short (5 to 7 minute) film and are including some footage from Surrey Swans.

They arrived before anyone else so that they could spend some time interviewing Mike who runs the pub where Surrey Swans meet.

At about 7:30 they dropped by the room where the Swans actually meet.

During the evening they filmed general goings on and also interviewed several volunteers.

Xander and Vlad with cameras. 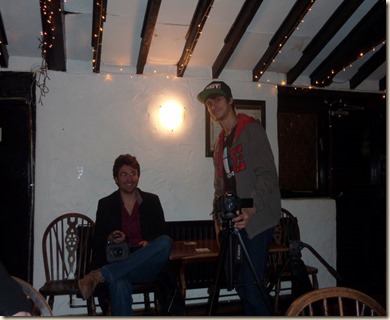 Vlad lines up the shot: 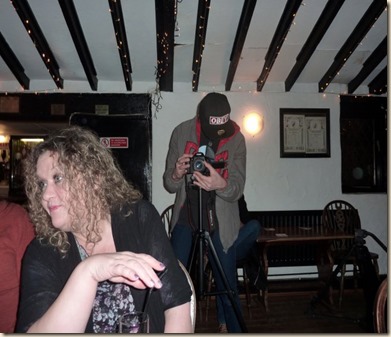 Vlad, Xander, Lexie (with thumbs up) and James setting things up for an interview. 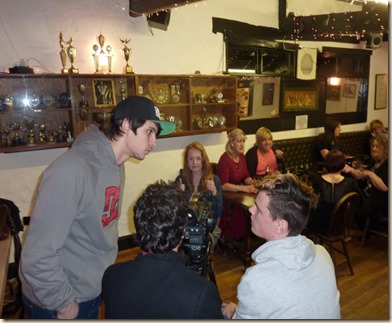 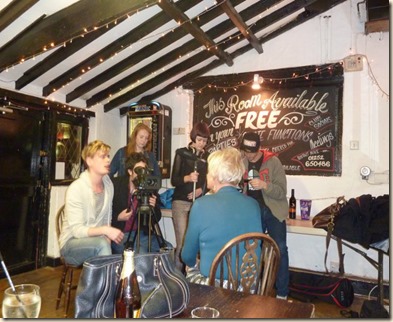 There was a band called No Lip playing in the main bar.

James asked if anyone was ok with the idea of being filmed as part of a No Lip audience. So half a dozen, or maybe more, of us spent a while tapping our feet in the bar.

No Lip in the main bar: 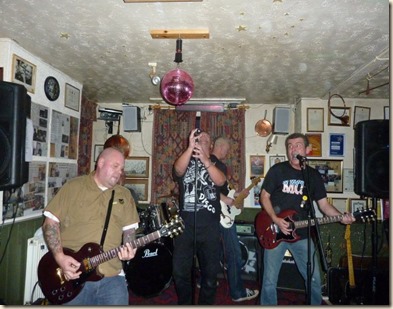 The crew take a break. Lexie, Sinead, Vlad and Xander. 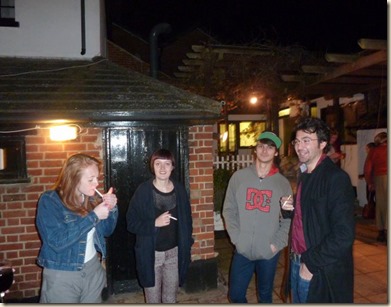 Shooting the juke box. I think the song was Girls Night Out. 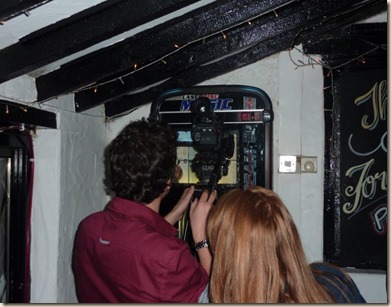 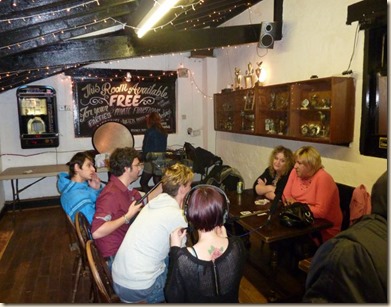 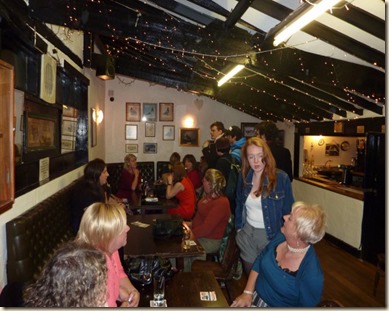 The end of the evening: Xander, Lexie, James, Andrea, Vlad and Sinead. 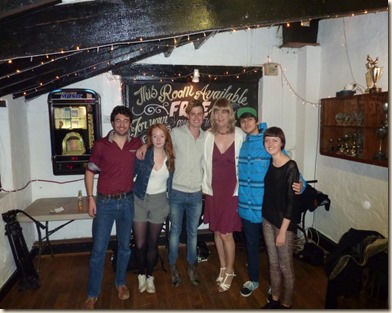 We’re hoping that we’ll be re-visited by the team at the end of January 2014 so they can show us the end results of all their hard work.

For me the evening was very special for several reasons.

The film crew were also great. Very friendly, helpful, unobtrusive and professional in everything that they did. Fantastic.

I feel that it’s good to open up the transgendered world to help people better understand it.

And it’s my hope that the making of the film will have helped James, Sinead, Lexie, Vlad and Xander understand us a bit better.

And that it’ll also help the tutors and other students on the course in the same way when they get to see the finished product.

The trip to the main bar was also unusual. Individuals have always done this from time to time, but it was unusual for so many of the group to be there together.

Again it’s all part of the process of making it not so unusual for transgendered people, in this case mainly transvestites, to be around in ordinary everyday kind of situations with no one feeling that it’s especially weird.

As this type of thing happens more and more, society … and individuals within society … will be given a chance to re-examine their preconceived ideas and learn to accept the transgendered simply as people.