Friday morning at 8 o’clock as the day begins.

Usually Friday means work. This Friday it marks the beginning of an Andrea weekend.

The weekend really begins on Thursday night with packing. The suitcase is large enough to keep Andy in clothing for a month. For Andrea it’ll be ok for two nights. It’s the shoes. And the dresses. And the makeup. Hair. Boobs. And all those other essentials and not-so essentials. After the packing there are toe nails and fingernails to paint.

Suitcases into the car. Leaving just enough room for the two of us. A neighbour is cutting grass and pays us no attention.

We catch up as Tina drives.

Ringwood. Coffee and sandwiches at the Boston Tea Party. Cheese and ham for one, bacon bap for the other. (This photo of Ringwood is courtesy of TripAdvisor)

Andrea needs to visit the ladies.

“Upstairs, through the door” says the waitress.

And through the doorway.

There are no signs.

But there’s a door at the end. See it? (This photo of Ringwood is courtesy of TripAdvisor)

Alas, the door is locked.

“Can I help?” asks a man who is sitting on the right … just about where the lady is sitting in the picture.

“Downstairs, through the door” says the man in response to Andrea’s query.

And through the doorway.

And that part of the journey is over.

Tina has a much shorter journey.

A few more miles and here we are at Bournemouth.

We buy a few bits and pieces and reach the hotel at about 15:00. 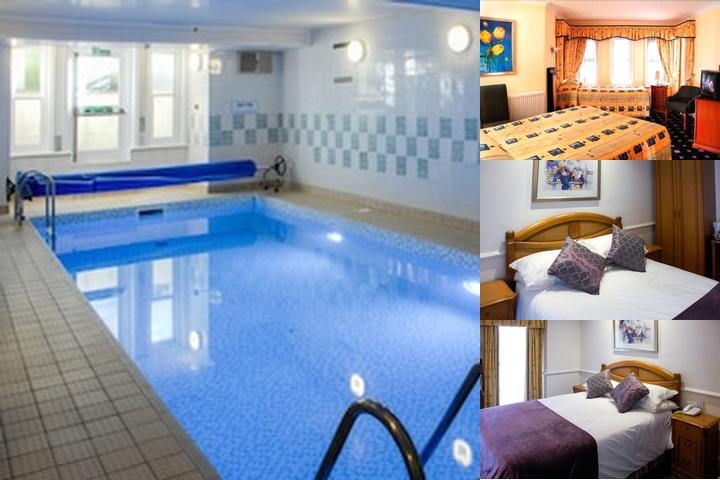 Check-in, drop the bags in the room and a trip to the bar.

We order a maybe-not-so-girlie Guinness each.

Danielle pops over to say hello and welcome.

We are at the TV Extravaganza Weekend

Round about 6 pm is the group fancy dress photo. For those with fancy dress. Very fancy.

The headmistress is especially eye catching.

Then dinner and the dance.

We are amazed at the number of  outfit changes that we’ve witnessed.

Andy could sleep until 9:00 am and still make it.

Just enough time for the transformation and to be at breakfast by 09:15.

Miss TV Bournemouth is to be followed by the Beau Belles.

And then .. would I mind being a judge for the Beau Belle competition? We three judges ponder as each Belle is interviewed.

The scores are counted and Lindy Loo is crowned. The picture above isn’t Lindy Loo … it’s just one that I found courtesy of a Google search.

Tina and Andrea set out to visit Bournemouth Pier.

We’re thinking about the return journey. And the steepness of the hill.

So it’s a right turn down Beacon Road instead.

And here is Tina, with the pier in the background. 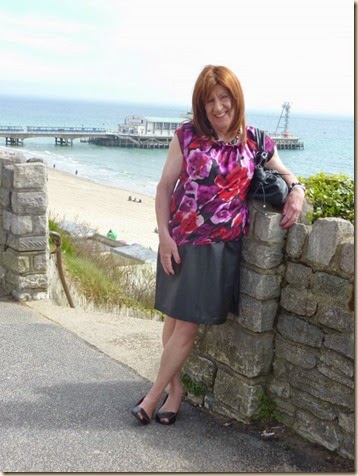 And a windswept looking me. 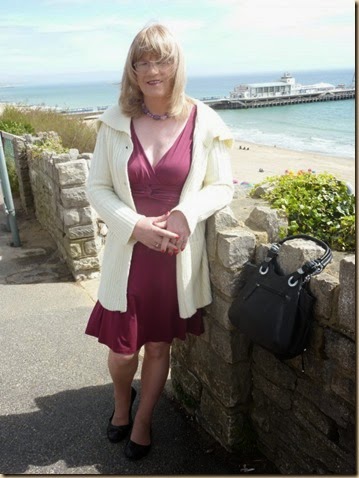 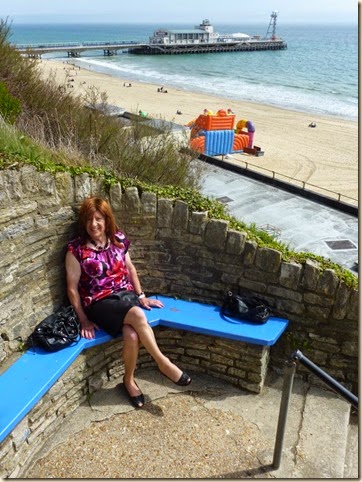 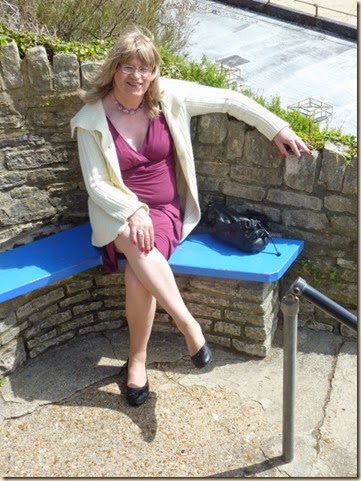 Then back to the New Westcliff via the newsagent.

It’s time for a change of attire and the barn dance.

Which is where the wars begin.

I don’t recall the name of the dance.

It involves moving round in a big circle, passing people,, hand to hand, who are moving the opposite way.

Once in a while you stop. Hold hands with the person you are about to pass. Raise hands and arms in the air and each spin around.

Andrea discovers that her bra and boob combination were not designed with this manoeuvre in mind.

Thankfully the dress that she is wearing saves the day. Or at least it saves the boobs and they don’t make a clean escape.

Walking around the circle isn’t so much hand to hand for Andrea any more as she fights to return her breasts to captivity.

The sweet thing is that though people realise why Andrea isn’t able to shake hands at the moment, no one is at all phased.

Soon it’ll be time for cocktails.

Makeup needs replacing … well … at least from the nose down. The chin bristles are beginning to make their presence felt. They need to be removed.

I wonder? Can I manage to make up half a face?

Makeup remover onto the neck, cheeks, chin and above the lips.

And it works and saves ages … no new eye shadow, liner or mascara

Cocktails and the group photo.

The conversation is broad.

The fact that one of the girls isn’t able to leave her house dressed as a girl because there was a period when trans-phobic youths would throw bricks through her window.

Dinner and then the dance. We retire to the bar. 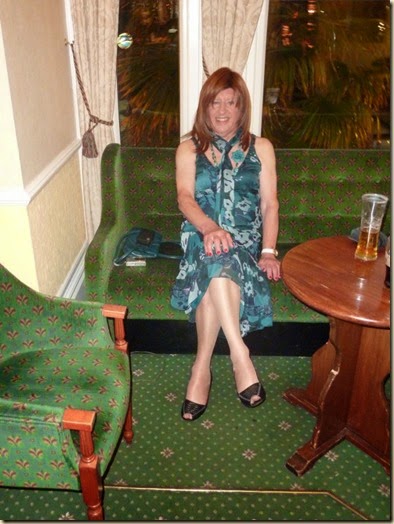 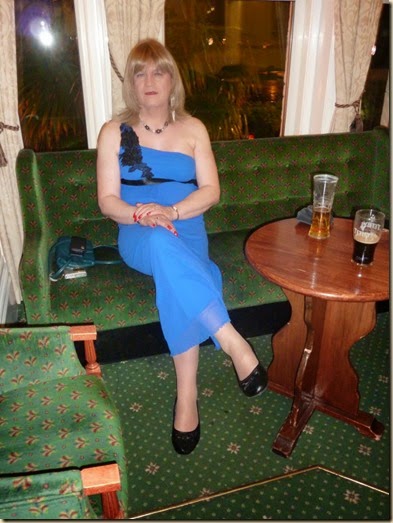 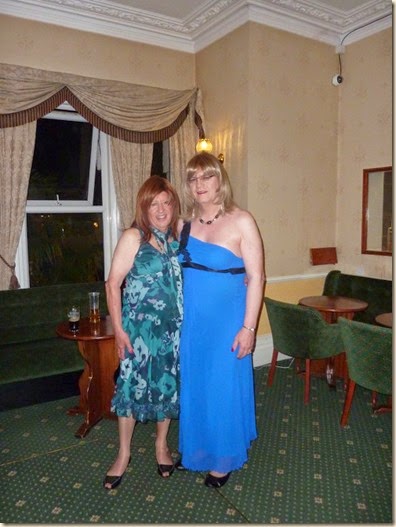 Nikki drops by and poses for some pictures on the bar.

Which leaves sleep and breakfast.

We stop by at Mudeford.

We almost stop by at Beaulieu.

At Lyndhurst we have a sandwich and coffee.

A fair amount of time is spent in the loo, recapturing boobs that have somehow escaped again.

At home it’s another half a makeup before heading to Surrey Swans.

There are a few less people than usual but there are quite a few girls that are relative newcomers and it’s really lovely to talk with them a little as well as with Emma, Carol and Tina.

On Monday I begin to realise the perils of clip-on earrings.

On the phone with an itching earlobe that I rub a little I notice the red stains on my fingers.

I think it’s the first time I’ve had bleeding earlobes.