Last night was a TV dinner at Billie and Kathie’s. And, as always, it was great. Lovely company and fantastic food.

It was really nice to meet Mandy and begin to get to know her a little. And nice also to meet Helen and her partner. And also to catch up with Billie, Kathie, Laura, Julia, Susan, Nikki, Tania, Katie & co. Katie is still one of the few TV (in more ways than one) celebrities that I know.

The food theme was traditional English … so last month I had made a connection with school dinners and suggested a schoolgirl theme.

Well some people have better memories than others … don’t we Susan … so there were just the two of us in school uniforms. Susan’s looked more authentic than mine though … the ones from Ann Summers are cute but do lack that sense of total realism somehow.

Billie: “Lift up your dress. What does it say?"

Of course, Katie had gone by then.

And how come Katie knows anyway?

The answer is back in  January.

A little later, feeling less shy … it says “Spank Me”.

Of course, it is Ann Summers fault. She makes the short dresses and prints the words on the panties.

No one spanked me.

The pictures here were actually taken at Trans Femme by Nik … but the uniform is the very one. And no, Nik didn’t spank me either :) 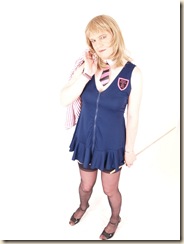 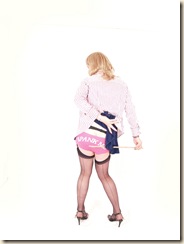 Tonight I watched the tail end of “The Apprentice” on TV. I think that what bothers me is that people can be such apparent sods to each other and not feel any sadness about it. Everything seems like competition. Nothing seems like co-operation. I know that there are difficult decisions that have to be made. And that sometimes you have to chose between what seems to be the lesser of the two evils. But is there no way to do this with dignity? Of the three that faced the prospect of the wagging finger that means “you’re fired” … there was no dignity. Apart, maybe, from the person that was fired.

I think maybe a lot of it is about being afraid. At least, when I’m afraid I am a sod.

It seems strange, I know … a guy that likes to dress in a skirt and wear makeup … talking about dignity. Where is the dignity in that?

The only answer that I have is that it is me being me. And in being me I don’t want to destroy other people.

In a way, in my heart I think it’s even stranger that society … and maybe even Sir Alan himself … seems happier to accept the kind of behaviour that people demonstrate to each other on The Apprentice as being normal and reasonable than they do the concept of men attempting to express aspects of femininity.