After the self defence meeting we meander back to the hotel.

A change of makeup and clothing.

Back to the park to see the awards … best outfit … style, deportment and personality … most convincing … miss congeniality … tranny of the year. Here are some of them: 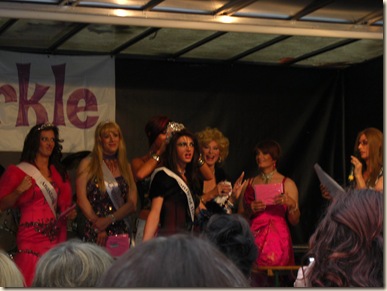 Tina also has a chat with the guys that drove the Pink Punters bus from Milton Keynes to Manchester … at a maximum speed of 37 miles per hour. Very patient kinda guys I think.

Tina seems to know a lot about buses. Almost as much as I do about Star Trek and Babylon 5.

Smiling, we wander back towards canal street and spot Paula and a friend sitting  at a table outside one of the many bars. We stand and chat a while. Paula’s feet are sore … to be more precise … one foot is sore.

We then head along Canal Street in search of something to eat. In the General direction of Velvet where Billie and I had a really nice meal last year.

Glancing briefly at the menu we head inside. Down the steps.

Part way down the steps is a fish tank. You walk over the top of it. I guess the glass is pretty tough.

The place is busy, but there will be a table in 10 minutes or so.

Back upstairs to the bar. The alternative Miss Manchester is at Velvet tonight.

I wave to Cindy as we sit down with our drinks,

The man from the restaurant downstairs comes and collects us.

Walking to the table I almost trip over the step in the floor.

Walking a little further … looking down very carefully for steps … I bump my head on the shiny globe dangling from the ceiling. But quite gently. I smile at the irony.

The food is great.

The decor is different. There aren’t too many restaurants that I’ve been to that provide an ambience quite like this: 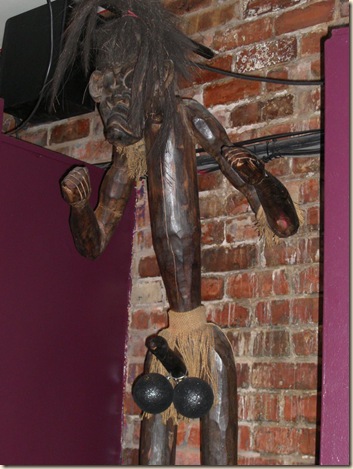 We enjoy the meal.

I don’t thing Tina has spotted the man in the background. 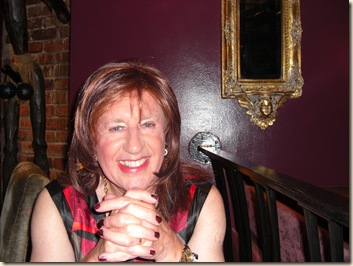 Top left … the globe that banged my head. 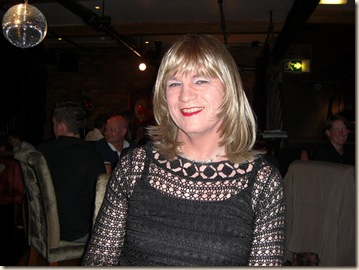 To the left and up a ways from where I am sitting … the right as in the picture … there are windows at about street level.

The weather forecast had said it would happen … and now it is happening.

Being occasionally sensible girls we are prepared.

We head for street level thinking … everywhere will be full … and noisy … and without seats.

Two thoughts come to mind … Eden … and the pub at the end of Canal Street that we visited last year.

Eden … the barge outside has seats. But Tina notices that people there have umbrellas raised.

So we walk on towards the pub … The New Union Hotel.

We go in and …. there are seats … and it is noisy … but not deafeningly noisy.

I order a Carling (lager), Tina a lemonade.

We share a table with a guy that is already there, sit and talk and watch the world.

The Mild brings back memories of my youth. I always drank Bitter though.

Just to our right there is a machine with a punch ball hanging down from it.

A couple of guys with their girls drop their money into the slot and hit it … hard.

Sore knuckles with the occasional smile or grimace.

A group of eight or so girls sit at a group of tables to our left. Mostly with pints of lager. Their drinks, like ours, are in plastic “glasses” … maybe they should be called plastics rather than glasses?

After a few minutes another girl arrives … standing at the far end of the group of tables throws a handbag across the room. It lands on top of the plastic pint. The girl at the end of the table is showered in beer.

Tina and I sit there smiling. I can’t help but think that if it had been a group of guys, warfare would have broken out.

As it is, there is just a lot of laughing and swearing.

The girl behind Tina insists on pressing her boobs against another girls face every so often.

“She loves it really.” she winks.

“I’m at Linsey’s 18th birthday bash”. So pronounce a whole stream of t-shirts. The names on the backs are all kinda cute. Sitting here a week or so later trying to remember them isn’t easy. The one that springs to mind is “Sticky Vicky”. Tina and I eventually decided it was because Vicky is quite a tall girl.

They take a few punches at the punch ball. Makes us smile, One of the girls almost performs a somersault … slipping as she winds up to punch the thing.

Linsey arrives eventually but we don’t quite get a chance to say happy birthday.

A guy celebrating his 21st birthday sits beside use together with a few friends. He’s slipped and landed badly on his back and is in quite a bit of pain. Staff at the pub fill in forms and offer what help they can  and we talk with him a while.

A couple of other girls arrive.

One off the girls at the table is chatting with them.

After a few minutes the new girl takes out a stick of lipstick and is carefully applying it to the girl from the tables lips.

I’m looking on in a “watching the world go by” kinda way.

As the lipstick application finishes I can read the lips of the girl from the table.

She’s looking in my general direction and saying to the new girl something like “I think the lady in black over there would like some lipstick.”

And so … the new girl looks over … and then walks over … lipstick in hand.

What takes me minutes, takes her seconds.

Maybe if I wore it every day I’d get faster?

She stands back and smile ….

The term dog’s bollocks is, in England at any rate, no bad thing.

I think she exaggerated … but it was a nice sentiment and I enjoyed the moment.

A little later I need the loo … bathroom.

I head for the ladies and there is a queue. The ladies in the queue don’t seem to mind.

I reach the front and head for a cubicle.

As I close the door I notice that inside the one cubicle there are two toilet pans facing each other.

The other one is vacant.

I smile. I am often reminded how different the girls world is from the guys.

Back at the table, Tina and I try a Guinness. Not bad.

Eventually we head back to the hotel. Pleasantly sleepy. The rain still falling.