While and Matthews, Poles, Love and Fear

Having listened quite a lot more to Chris While and Julie Matthews (http://www.whileandmatthews.co.uk/) , I must say I like them a lot.

I bought the CD from Amazon’s download site and spent quite a while searching out lyrics of the songs somewhere on the WEB … with no luck at all until tonight. Googling for “distant as the poles” came back with a hit …the parent page of which is: http://www.whileandmatthews.co.uk/Julie%20website/Song%20pages/ which has lots of lyrics.

I mentioned the song Distant as the Poles in an earlier post.You can listen to the first bit at: http://www.amazon.co.uk/gp/product/B002E3D0IA/ref=dm_dp_trk6 (click the preview button when you get there) and also there is a version from a fan. 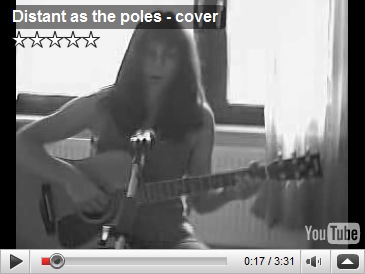 When I first listened to the song it reminded me of the feelings of a parent as a child grows … the pain of letting go. And yet there isn’t another way.

I think that as time has passed I’ve learned, a little at least,  that holding onto people too tightly seems to be a sure fire way of pushing them away.

Driving back from work tonight I thought of the way that futility of getting things by force. The way that compulsion seems to be doomed to failure.

The things we do out of compulsion don’t last. The first chance we get … we do something else.

I think it explains why, in the end, love is stronger than fear.

Email ThisBlogThis!Share to TwitterShare to FacebookShare to Pinterest
Labels: Distant as the poles, Fear, love, While and Matthewa