A little while ago on the TV news there was an item about two people being stoned to death in Afghanistan. There’s information about it here and here.

I found it saddening. Appalling.

I know that this personal face-to-face kind of violence isn’t the only way that people hurt people.

Societies hurt whole societies as described here. And when a society hurts another society …. really it is people that are hurting people. But in an impersonal kind of way.

Today while I was walking at lunch time I was thinking about the casting of stones. Of the way that at times it’s easy to pass judgement upon others and exact some kind of punishment.

I then thought of this story written in the New Testament:

Early the next morning Jesus went back to the Temple. All the people gathered around him, and he sat down and began to teach them.
The teachers of the Law and the Pharisees brought in a woman who had been caught committing adultery, and they made her stand before them all.
"Teacher," they said to Jesus, "this woman was caught in the very act of committing adultery. In our Law Moses commanded that such a woman must be stoned to death. Now, what do you say?"
They said this to trap Jesus, so that they could accuse him. But he bent over and wrote on the ground with his finger.
As they stood there asking him questions, he straightened up and said to them, "Whichever one of you has committed no sin may throw the first stone at her."
Then he bent over again and wrote on the ground.
When they heard this, they all left, one by one, the older ones first. Jesus was left alone, with the woman still standing there.
He straightened up and said to her, "Where are they? Is there no one left to condemn you?"
"No one, sir," she answered.

"Well, then," Jesus said, "I do not condemn you either. Go, but do not sin again.

The story is in video here:

I was struck by one of the comments left there:

“ive﻿ made fun of jesus b4 i feel kinda bad now hes way cool for doing this, if only the religious nutters like the westboro baptist church wud follow his true beliefs”

It sort of fits in with the idea that to be like Christ isn’t necessarily to be like people at some churches at least.

Life is so much more than following a set of rules in a book.

On a different, but related theme, I discovered this as well: 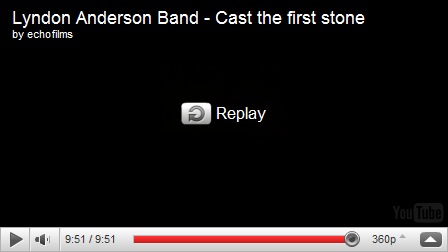 Have a listen. What do you think? Wow.

Always one of my fave stories in the New Testament--especially "neither do I condemn you." He advises her not to sin again, but will not punish her for her sins. To me, the moral is that we all sin, but God is not in the business of punishing sins, but forgiving them.