Back in March I was contacted by Claire at BBC Radio Berkshire to ask if I was interested in taking part in The Listening Project. She knew of the interview that I’d done with Bill Buckley back in March.

The Listening Project is about “capturing the nation in conversation to build a unique picture of our lives today and preserve it for future generations”. There’s more info on it here. As Claire summarised it:

In a nutshell, we get two people who are close to each other (friends, family, loved ones) into a studio and record a conversation/interview of about 40 minutes in length. One person acts more as the interviewer but it’s more natural and casual than a formal interview. We, as journalists, don’t get too involved, we can help guide the conversation but we let you set the agenda.

This audio will then be archived and put in the British Library for people to use for research in the future. It’s an opportunity to record, share, and preserve the stories of our lives.

The audio is also cut into a shorter piece and played on the BBC Radio Berkshire and on Radio 4 as part of this exciting new project starting at the end of the month.

I asked Sally, my wife, if she liked the idea, but she was a little nervous about it. Both my daughters were interested though. In the end it was easier for Katie to take part … so long as it could be fitted in around her exam schedule.

It took a little organising to come up with a date that worked, but we eventually managed to make a recording on Saturday May 5th.

We arranged to be at the BBC Berkshire studios at 9:00 am. Graham McKechnie, the producer of the project at BBC Berkshire, needed to be commentating at a London Irish rugby match later in the day, hence the early start.

Actually, 9:00 am isn’t so early except that Katie needed to travel by train from London to home first, and I needed to spend a while applying makeup

I get up and make tea (for Sally) and coffee (for me).

Having already decided what to wear the previous night, collecting things from the wardrobe only takes a couple of minutes.

Deodorant. Shave. Teeth. Moisturiser. Underwear. Tights (stockings and suspenders are tricky to do at the moment, my thumb is still on the sensitive side). Perfume. Foundation. Powder. Shadow.

7:15 and Sally sets off to collect Katie from Heathrow Terminal 2. The rail service from London to Windsor isn’t fully operational this weekend, so it’s easier for Katie to get to Heathrow, which is about 20 minutes from home).

Makes me smile, thinking how much extra sleep I could have had if this had been in drab (dressed as a bloke).

Waiting for Katie and Sally I take a few pictures for posterity. 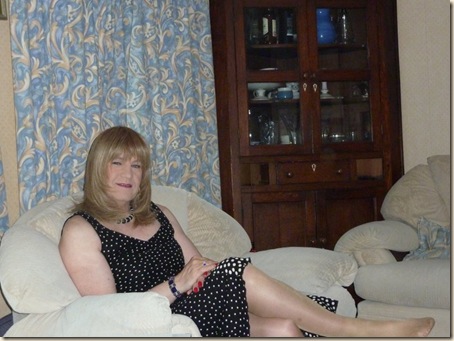 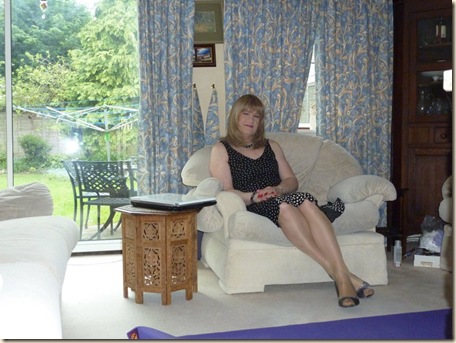 Katie heads for the loo.

I head for the car and prepare the Sat Nav.

8:25 and Katie re-appears. She’d been at a birthday party the previous evening which went on until 3:00 am, so she’s had a lot less sleep than me.

The journey to Caversham is uneventful, though I did miss the same left turn that I missed the last time that I drove there.

8:57 I press the button at the entrance … “Andrea and Katie Wright here for an interview with BBC Berkshire.” The barrier is lowered.

We park and walk towards reception.

A car pulls up beside us, window down.

Graham parks and catches us up. I introduce him to Katie.

Graham heads off to collect some paperwork.

When he gets back he explains a little more about the Listening Project and tells us a bit about the work that he does and how it all works.

We feel relaxed and welcome.

The paperwork is filled in.

Katie offers up the name Katherine, which makes me smile.

“Would you prefer Katie?” asks Graham.

So Katie it is.

“Male”, I respond. Makes me smile to be asked.

Then into the studio.

“What did you have for breakfast?”

“Nothing” says Katie. A late night, early morning and travelling from London.

“Me neither” says Andrea. Preoccupied with the makeup.

And then we begin.

We talk of parents. Grandparents. Childhood.

Of my gender identity. How people have handled it. How they have felt about it. How I feel about it. How Katie feels about it. Sally. Sarah. Extended family. Friends. Where it came from. Where it is going.

Graham asks if he can suggest a few questions … making it clear we’re free to ignore him if we prefer.

We talk about the difference that being TV has made to me. To Katie.

Fifty minutes have flown by. And I’ve learned a lot.

And time to go.

We both enjoyed the experience a lot and learned things about each other.

When I receive a copy of the recording I’ll post that if Katie is ok with it, together with the pictures.

And many thanks Claire for the time given up in organising it all and to Graham for the time to record it, for making us feel so relaxed and for the really helpful advice, interest and questions.

A fascinating account and I hope someday we can hear Katie's thoughts on your being TV.