A few months ago Anne Yarwood, a close friend of Sally and I asked if I would be editor of the month for the web site that she has produced - The Imagination Acts.
The result was a collection pf pictures and words with a theme of Several Shades of T – Unity within Diversity 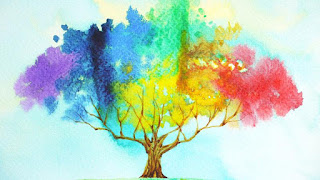 It reads as follows - please see The Imagination Acts web site for the pictures.

There is a human tendency towards classification and categorisation. To assign labels. To generalise. Male. Female. Straight. Lesbian. Gay. Bi. Trans.

Classification has its uses, but also limitations.

We can use labels to form alliances and to define borders. To stereotype. To marginalise.

It challenges me that I sometimes construct borderlines as a way of self defence and preservation and fail to see the bigger picture. It is possible to value the things that hold us together. To uphold each other. And to celebrate our distinctiveness.

After more than half a lifetime of denial I gave up a battle with myself and began to accept myself as the person that I am. This came with the label “trans”. As time passes, I need to regularly remind myself of the inadequacy of this label. To see that no label defines who I am. Or who you are. There is a much bigger story to your life and to mine.

The Borderline
Cos what is love – a word, the feeling of you ?
Something we dream or the things that we do ?
And who am I – these thoughts, this feeling, my views
A fragile form or a dreamer like you ?
Are we so different, defined ?
Where is the borderline ?

When we are like water, like trees
We have a name, an illusion of identity
Of boundaries, of borderlines
But my dreams are yours and your fears are mine
I hope we wake up from this dream of being different, defined
When we are only space and time

Emily Maguire (https://emilymaguire.com/biog/) is a singer-song writer, poet and composer. The International Society for Bipolar Disorders awarded her the 2019 Mogens Schou Award for Public Service and Advocacy.

Several Shades of T
The storyline that I’m thinking of opened with L and G.

After a while they were joined by B.

More recently a large selection of the rest of the alphabet has joined in. Some of them more than once.

Sometimes the newcomers all get represented by just a +.

But the story isn’t about the alphabet.

It began long before the alphabet got involved.

And like all stories about people, whilst there are still people the story will continue.

Some people are intimately involved in the story. Others are more on the periphery. We can all be involved. In some ways, we all are involved.

There is a truth in that different people read the same story in different ways.

Some see a collection of different letters of the alphabet. They don’t identify with any of the letters. The story is a threat. An anathema. An abomination. They want to put an end to it. But the story is about people and not the alphabet. Ending it involves blood. And even then, whilst there are people the story will continue.

Some claim a letter as their own. They hold it close. They know it and understand it. Looking at the other letters they aren’t so sure. Not all letters are equal. Some of them are frauds. Dangerous. Threatening. They need to be restricted. Controlled.

Some don’t consciously read the story at all. But by words, silences, actions and inactions they take part.

My own take on it has changed. Is still changing.

I’ve discovered that I have letters in this story.

I know other people that have the same letters.

But sharing the same letters in a story doesn’t make us the same people. We have our own thoughts, feelings, preferences. And we can even read the same story in different ways.

I know other people with other letters.

But I know no one for whom a letter, or even an entire alphabet, provides an adequate definition of who they are.

In all of this I identify as T and G – that is a Trans person that is Genderfluid.

So, what does that mean? And does it matter.

The term trans is often defined as something like this: an umbrella term for all people who cross traditional gender boundaries – whether that is permanently or periodically (https://www.nhs.uk/livewell/transhealth/documents/livingmylife.pdf.

However, the definitions certainly have their limitations.

I’ve come across some trans people who don’t like to stand under the same umbrella as other trans people. Which might add another letter to the story to accommodate them.

Some people don’t believe that T has the right to be included along with LG or B.

Sometimes, people begin to talk trans and then focus more upon pronouns, lavatories, changing rooms and restrooms than they do on people.

Sometimes people say and do things that are much worse.

What special rights should trans people have?

Perhaps nothing more special than things that I believe should be given to all people.

Ultimately, what every trans person that I know wishes for, is to simply be themselves.

It’s not about special treatment or privileges.

Of course, that’s the beginning of a story more than it is the end of one. Pronouns, restrooms, changing rooms and safe spaces matter.

People are capable of pretending to be someone that they are not.

But in working out solutions to these challenges let’s remember that behind every acronym and label there are real people. That even when people share the same label, they are different from each other. That there is no single voice that fully represents any label. That it is possible to disagree with someone else and yet to do that with respect and kindness. That there are times when the ability to reach a compromise is a strength. That it is better to listen to and talk with each other than it is to write about each other. That whispers sometimes speak more loudly than yells.

The acronyms are complicated. People are complex. But there is something special when people that pick up different labels are able to move beyond the things that make them different. To see diversity as a thing that can enrich and strengthen rather than something that weakens and destroys.

And of course, just like you, I have lots of other letters of the alphabet in lots of other stories. And we’re all involved in each of these stories in one way or another. Some stories touch us closely. Others seem to be more distant. But we are involved. What we say and do has an effect. Our inactions and silences also have an effect. And all the separate stories are, in reality, parts of a single bigger story.

And so, even though I am not L or G or B, I still speak out. We are all neighbours (www.biblegateway.com/passage).

Last year I discovered the music of Emily Maguire (https://emilymaguire.com/ ) and was especially touched when listening to a song of hers called The Borderline which speaks to me of the way it can be so easy to concentrate on things that divide us rather than the things that hold us together. You can listen to it  HERE  and  HERE.

Where is the borderline
The boundary between your tribe and mine
Are we the rain, the river, the cloud and the sea
If we are like water then which drop is me

And what is time – the fast blink of an eye
A circle so vast that we think it’s a line
And what is space – the air, the silence we breathe
A place of our own and the ghosts we don’t see Is it the boundary, the borderline
Between you and I, your mind and mine

Is fire the spark, the fuel, the air or the heat
The smoke in your eyes or the ash at your feet
Are trees the root, the branch, the wood or the leaves
The forest we burn or the broom that we keep
Beneath the stairs, the stars, the space in a jar. The air outside is that where you are
Is that the borderline, the boundary
Between you and I, between your tribe and mine

But isn’t fear the dark shadow of hope
The things that we want and the things that we don’t
And so we cling and close the eyes that look in,
The soul we don’t see under the skin
Cos that’s a boundary, the borderline
Between you and I, between your tribe and mine

But we both were born and both will die
And in between will doubt and dream
Of a better life than life before
A meaning or a reason for
This feeling of being different, defined
When we are only dreaming of boundaries and borderlines
I hope we wake up

Cos what is love – a word, the feeling of you
Something we dream or the things that we do
And who am I – these thoughts, this feeling, my views
A fragile form or a dreamer like you
Are we so different, defined
Where is the borderline?

When we are like water, like trees
We have a name, an illusion of identity
Of boundaries, of borderlines
But my dreams are yours and your fears are mine
I hope we wake up from this dream of being different, defined
When we are only space and time

And yes, I too hope that we wake up. 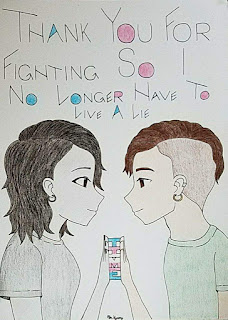