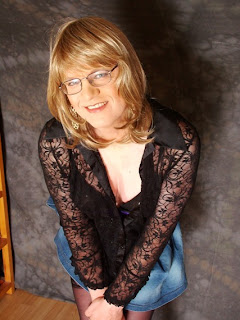 Yesterday I went to visit Fiona for a makeover and photos.

My wife is away a few days ... she'd suggested maybe it would be nice to visit Fiona - it was really nice that she did.

I arrived in Portsmouth a little after noon. Was good to meet with some friends of Fiona's.

During the afternoon Fiona asked if I'd like to go out to a local pub in the evening. Gosh ... yes!

After the makeup and pictures I watched TV a bit, had a glass of wine and chatted with Lauren and Fiona. In the early evening Kelly arrived.

At round about 8:00 pm we headed downstairs. I felt a lot less nervous than I expected. I think that deep down I had decided that more than almost anything I wanted to give Andrea a chance to step outside. And yet ... there was a sensation of nervousness.

So ... the front door opened and Andrea took her first stiletto heeled steps into the big wide world.

It was raining so there weren't many people about as we walked fifty yards or so to the car. I don't know if the few people that were there paid us any attention. I suspect not - more interested in getting in out of the rain than watching a few trannies wandering around.

We got into the car. I remembered the DVD that I had watched about applying makeup. It had a session on deportment. So ... I took my shoes off before I started the engine.

Then a couple of miles to the pub.

I really didn't know how I was going to feel about this.

Just followed Fiona round the bar. There were a couple of other t-girls there. But mostly the place was full of people just having a drink and listening to the band.

In a way I felt people looking over at us.

But not in a hostile way.

It would be easy to over emphasize this ... over dramatise it ... overstate it.

But, I do remember standing there talking and sipping at a glass of wine and feeling that at last ... this part of me that has been hidden away for so long ... at last she's been able to step outside into the world. And not feel ashamed. And not feel guilty. I could just be me. One of the nicest and most fulfilling moments of my life.

I talked with Lauren, Nikkie, Kelly, Carol and Neena. A few other people just drinking at the pub came over and talked a little as well.

As with almost all trips to a pub there came that inevitable moment when the capacity of the bladder is insufficient for the moment.

So ... my first visit to a Ladies at a pub - well ... except for one time when I went through the wrong door by accident.

At closing time we got a taxi back to Fiona's. Stayed up very late talking.

This morning I drove back home. The only remaining makeup was the nail polish that I left on my fingernails.

This whole thing has been more special than I had ever imagined it could possibly be. A million miles from my imaginings.

It's strange that sometimes when a fantasy becomes a reality it's a big big let down. This reality is so much better than I ever thought.

I remember talking with Lauren last night about my wife. About how she was coping with Andrea being around. Lauren said to me that in my position that would make her feel more love for her. And that's how it feels to me as well.

Kelly drove me round to the pub to collect the car from the night before. We talked about wives and kids and things. I said how grateful I was that y wife wasn't freaking out ... and that I realise that it can't be easy for her ... that if the situation were reversed I'd find it difficult as well. Kelly said ... "yes ... if she started wearing a moustache and beard ...". That made me smile. But also, it made me thankful of my wife's attitude.

Fiona Floyd ... thank you! I do know that you know how much this means to me because I've told you. But anyway ... it doesn't do any harm at all to say some things more than once.