Sally, my wife, has been away the past few days … walking and golfing in North Wales. School holidays have benefits as well as disadvantages I guess.

Laura came over on Saturday evening and spent the night. It was a really pleasant evening. We drank tea and talked a bit and then went into Windsor for a while. Parking the car at the local library car park which is free in the evening … we walked up along Peascod street and down Thames Street past the castle. It began to rain a little se we ducked into the Central Station shopping area which provided a perfect opportunity to get a bite to eat at Cafe Rouge. It was quite busy so we sat outside … it’s a nice location in a covered area. The environment is perfect …. friendly … accepting. 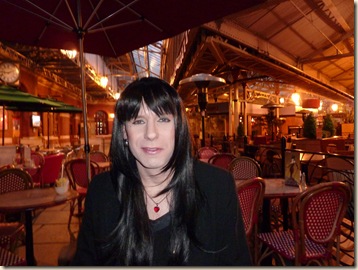 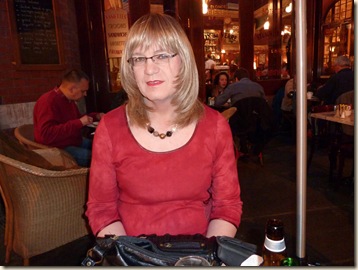 After eating we wandered back up to Thames Street. The rain had stopped so we took a left and headed down towards the river. It was just beginning to get dark … so sometime round about 9:00 pm I guess.

We turned left just before the Theatre Royal. Walking down the road with the theatre to our right a group of three girls were headed towards us.

“Excuse me … do you know where there’s a shop?” asks one.

“One that sells cigarettes. And that’s open.” she smiles.

It makes a nice change to be able to helpful in these circumstances and know the answer.

They thank us and head right.

It’s strange. Just a few years ago I couldn’t have imagined wandering anywhere in public as a girl. And even more surprising is the way that so many people accept the whole thing so easily. However much people don’t notice … as soon as a trannie speaks … well … it’s a bit of a giveaway. But so many people seem to not be perturbed.

We continued on down towards the river. Still a few people walking here and there and several swans a-swimming.

We headed for the bridge that connects Windsor with Eaton.

Here’s Laura on the bridge. You can see the Windsor Eye (kinda like the London Eye but on a smaller scale) in the background. 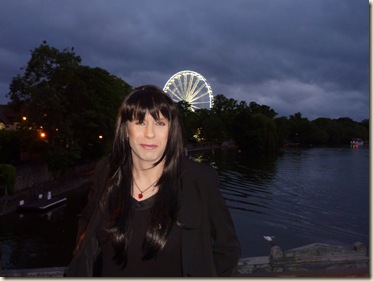 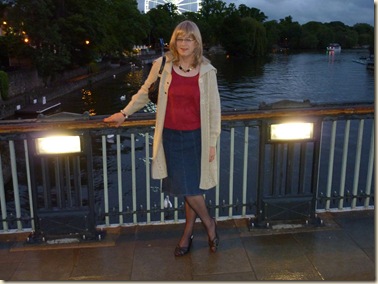 We meandered back towards the library car park and headed home.

The rest of the evening we talked and talked and talked about all kinds of things. Especially music. Peter Gabriel … a new CD Scratch my Back … is kind of unusual … but very pleasant. Bob Dylan … Bruce Springsteen … Indigo Girls … While and Matthews.

Oh … yes … we managed to get through a fair amount of wine and Budweiser between us as well.

One minute we were talking … I was trying to remember which store sold Evie branded goods. The thought Peacocks came to mind.

Time to remove makeup and get some sleep.

I really enjoyed the evening. Laura is a great friend.

Sunday was a Surrey Swans evening. A chance to catch up with friends again … Laura, Billie, Emma and Tina.

Last night there was a story on the news about gay people … women mainly … in South Africa. Not easy at all. A lesbian that was raped and murdered just because she was lesbian. What kind of people would do that? Why are we … men especially … so afraid of what is different? Why does fear instil violence and hatred?

Today in Cumbria a taxi driver shot 12 people dead and injured 25. What drives someone to do that? What makes a man so afraid?

It makes the choice between stockings, tights and hold-ups seem somewhat mundane.

I heard on the breakfast news that 96% of dangerous driving offences are committed by men.

I emailed my MP (Member of Parliament) a little over a week ago asking about the government’s position on the homophobic bill that is being considered in Uganda. Having had no reply I emailed again last night and copied the PM (Prime Minister) as well. Tonight I received an acknowledgement from my MP’s PA (Parliamentary Assistant) with an assurance that he is looking into things and will write to me.

A  few days ago I received an email from someone that had read my profile and would like a chance to meet with people at the Surrey Swans … that was cool.