A night on the town

Sally was away last Saturday so I took the opportunity to invite a few friends for a girls night out and a sleepover.

Sally was very sweet … I got home on Friday night to find that she’d sorted out the rooms for everyone.

I was all made up and ready by about 4:30 pm. Billie arrived soon after that. We sat in the garden with a glass of wine and chatted as we waited for the others to arrive.

Laura and Billie in the garden … 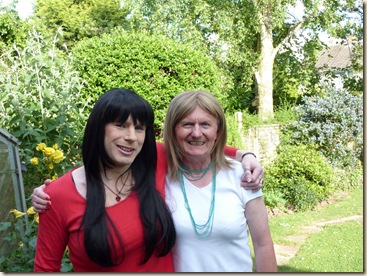 And me and Billie: 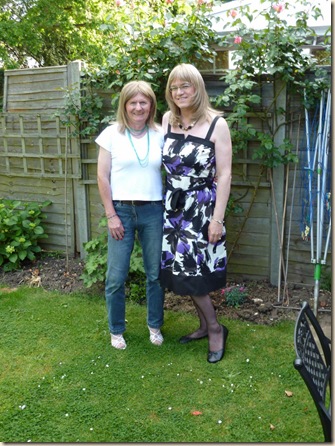 Eventually everyone was ready …

Surreptitiously sneaking out to the car in the driveway is an impossibility when there are four of you.

Getting into the car was an exceedingly odd experience.

A small 2 door Nissan Micra and a gaggle of taller than average girls was bound to be a little different.

The way that Billie decided to get into the back seat was more than different.

The passenger door was open and the seat folded forwards.

Nikki found it hard to believe.

I couldn’t see how it could possibly work.

Billie was sitting on the floor.

Somehow though … Billie ended up sitting on the seat.

Quite a bit of squirming around I think.

There followed a short drive to the car park at the library.

I went to get a ticket from the machine … and so have no knowledge at all of how Billie managed to get out of the car.

The ticket was inexpensive … it’s free for Windsor residents after 7:00 pm.

The walk from the library car park, through the little alleyway to Peascod Street … then up towards Windsor Castle … along Thames Street towards the Central Station and to Cafe Rouge is uneventful. Though not without a little pain for those of us with higher heels.

A table for four.

The restaurant was fairly quiet … I guess a lot of people were watching England play the USA in the World Cup match.

No one pays us any undue attention.

Nikki manages to wangle a steak for the price of a chicken dish.

After paying the bill we head off back towards Peascod Street.

We pause to take a few pictures. 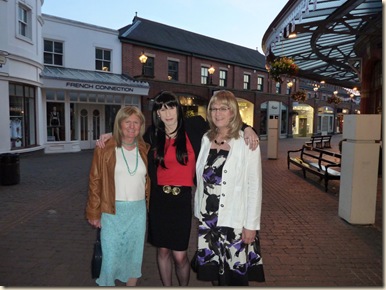 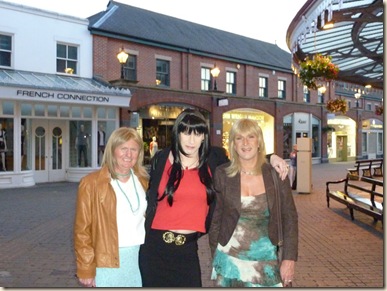 There is a sense in which Trannies out in the wild ought to remain as inconspicuous as possible.

There’s another sense in which this isn’t at all easy.

As we take the pictures people walking by can’t help but notice. After all … our voices are a little on the husky side. But no one minds or says anything.

Walking down Peascod Street we pass a group of girls … Filipino I think … who say hello. They’re headed to the Liquid nightclub. One has her shoes in her hand … sore feet … and is impressed at the height of Laura and Nikki’s heels and the fact that they are still walking on them.

As we reach the Crosses Corner … it looks a little more daunting than expected.

There’s quite a crowd of people outside … a lot of macho looking kinda guys.

We decide to give it a go anyway and walk through the throng towards the entrance. In as ladylike a manner as we can.

But no one is taking or giving offence.

We order some drinks … orange juice for me … the joy of driving … and sit down at a table.

After a little while the landlord comes to collect empty glasses.

I pass Billie’s glass … oops … it’s not quite empty.

I pass it back and genteelly slap my own wrist.

There’s a little debris on the table from previous occupants.

The landlord smiles and looks at Billie.

“Give me your nuts” he says.

We giggle … a husky kind of giggle … and pass the almost empty bag of peanuts.

It’s quite noisy … the aftermath of the World Cup match … with fairly loud music.

As we head towards the exit a cheer sounds. At first just a coiuple of voices and then most of the people in the pub.

Maybe the second loudest cheer of the evening … England perhaps got a louder one when they scored.

Someone assists Laura down the steps.

The cheer is … I think … good natured.

The atmosphere wasn’t entirely a “make yourself at home” kind of thing. But nor was it hostile.

Outside amongst the still quite large group of people we work out where to head next. No one is paying us any attention. Which is a good thing.

We head back up Peascod Street aiming vaguely for The King and Castle pub on Thames Street.

A group of guys walk past.

One of them wanders towards us.

He says something … but we’re not sure what it is.

He’s obviously had more alcohol than is good for a person and seems to be speaking in an Eastern European language.

He seems to be smiling though.

He continues walking alongside.

Back and forth … away a little and then back towards us.

We have no idea what he is saying. No real idea of his intentions.

Eventually … he walks right across in front of us … and towards Nikki ,,, blocking her path and saying something that makes no real sense. But it sounds somewhat unpleasant.

I step between them … hoping that it will be interpreted as a … hey … let’s cool things down kind of thing … in a pleasant kind of manner.

The guy looks me in the eye …. and pushes his chest into me.

I’m not sure what he expects me to do at this point.

Two girls walking past come over towards us and say to him … “You know …. there are a couple of policemen headed this way …. you ought to calm down.”

He seems to speak quite well in English swear words.

Actually … it is my firm belief that almost every male on the planet that has reached the age of puberty would have to plead guilty to this in their more honest moments. Even those of us that wear dresses from time to time.

I am pretty sure that the Eastern European gentleman falls into this category as much as I do.

He carries on swearing a while.

The girls re-emphasise the coming of the policemen.

After a few moments a friend of the guys takes a hold of his arm and pulls him away … offering apologies.

They head off up the street.

It’s strange. A first experience for me.

As Nikki mentions though … such big extremes in behaviour.

The total twateddness of a drunken man … and the sweetness of a couple of girls who could have just walked on down the street but actually took the trouble … and risk … of coming over and offering assistance.

There’s shouting from further along the street as our friend begins to verbally abuse other people that he is passing. It seems that it’s human beings that he has a problem with … not just trannies.

We decide to get to the King and Castle via King Edward Court rather than along Peascod Street.

And so … eventually … we arrive.

Nikki goes to order the drinks.

A girl walking by smiles at Laura and says “Ohhhh … I like your hair” and runs her fingers through it.

As she disappears into the distance Laura recovers from the surprise and thinks about the things she could have said.

Maybe I should have complimented her in some way. “You have great boobs …”. Well … then again … maybe not she smiles.

We sit on the terrace. People notice us. But it;s fine.

A man comes over and asks if we’d mind coming sitting with him and his friend. Just curious he says.

It’s not easy to be sure about people’s motives … but Billie goes along and sits and chats with them a while … and the buy a drink … and they really do just want to talk and ask questions.

The time comes to head back.

Nikki and Laura are walking a little ahead of me. I allow them to walk past the alleyway that leads back to the library and then call them back.

The main reason is that I spotted the guy that ducked into the alleyway to pee and though it would be better not to surprise him.

Billie gets into the car backwards again and before you know it we’re back home.

It takes Billie an age to get out of the car.

We talk. Drink. Listen to music. Compare breast sizes. In a bizarre few moments we try a breast exchange. 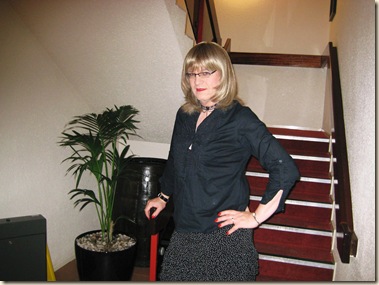 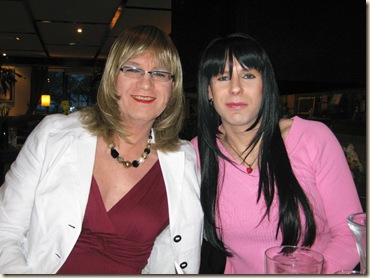 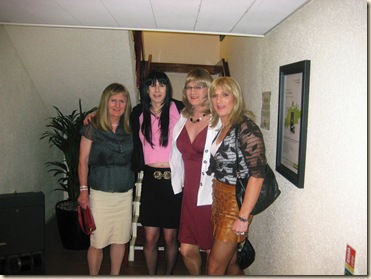 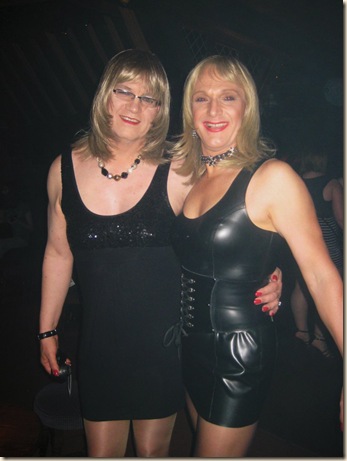 Nikki makes me smile as she tells us about the perils of printing photographs at Boots.

A really enjoyable … though fraught in parts … evening.