Friday had been a Candy Girls evening.

Saturday was a Pink Punters night.

By about 7:00 we were all set and headed down to the hotel bar and restaurant and had a drink. Chatted a while with another tgirl then had a bite to eat.

Then back to the bedroom to get changed.

I’ve picked up an addiction from Nikki I think … so here are the hotel corridor shots. 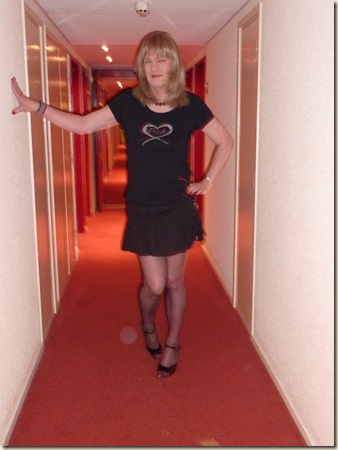 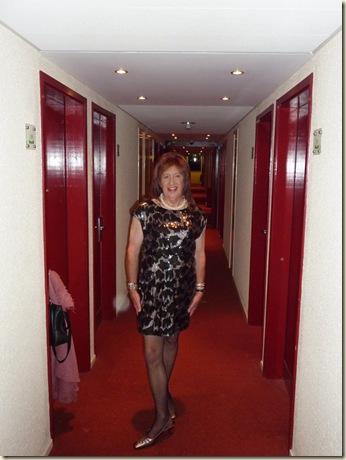 Tina had asked me …

“Why does your shirt say Pink on it when it’s black?”

“The secret”, I explain, “is in the colour of the word Pink”.

To be fair … the Pink did look kind of yellow in the hotel lighting.

But it made me giggle.

The shortest route from the hotel entrance to Pink Punters involves crossing the ditch. Kind of the the Bechers Brook of the tranny world.

Actually it’s just a little dip in the ground … but it is grassy and on a dark evening … especially on the way back … after a drink … and in high heels … well … it is a challenge … and there have been those that have fallen.

Rumour had it that the ditch had been filled in!

In fact … the ditch is there … but the gap is now bridged so the tiny little walk is much less fraught.

The security men say hello and we head up the steps and have a little chat with the lady at reception.

It’s still quite early and the place is very quiet …that’s in terms of the number of people that are there … the music on the dance floors never gets what I would call quiet.

We sit and chat.

The photographer heads our way and takes a picture: 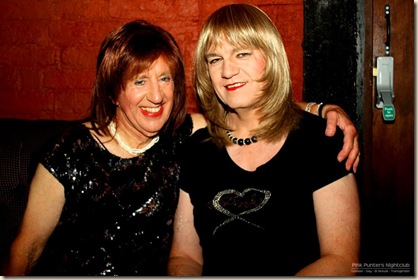 The original is here.

There are loads of pictures of the evening here.

We chat a while about all kinds of things. I remember mentioning that one of the sociological differences that seems to exist between tgirls and ggirls is the way that ggirls never seem to visit the bathroom unaccompanied. I’m using the term bathroom in an American kind of way here.

We head for the dance floor for a bit.

My turn to get the Fosters.

The bar is a little crowded and I’m standing behind three girls who apologise for being in the way. But I manage to perch at the end of the bar and p[lace an order.

“Mind your head” I hear.

I pay for the drinks and turn round to see where Tina is.

Nowhere to be seen.

I look here. And there.

Maybe Tina has paid an unaccompanied visit to the bathroom?

I put the drinks down on a table and sit down.

Just a minute or two later I hear a voice:

“Excuse me … are you waiting for somebody?”

It’s one of the three girls that had been at the bar.

“Well … we were wondering if you’d like to come and join us” she says.

I collect the drinks and move tables.

We’re all surprised that Tina should disappear without the drink.

Very mysterious we all think.

We all introduce ourselves … Dawn … Emma and Annette … and, of course, Andrea.

They’re a little amazed that people travel from Windsor to get to Pink Punters.

After a while Annette mentions that she is Emma’s mum.

Emma explains how strange an admission this is … “you said I shouldn’t call you mum out here … and it’s been really hard getting used to calling you Annette when you’re my mum.”

Dawn is Emma’s cousin. I think.

She was sitting in an alcove at the end of the bar … hidden from sight almost … and had been wondering where I had gotten to.

Emma and Dawn spot a tgirl sitting alone at the bar and invite her over … Erica.

“Can I ask you a question?” asks Emma.

“Why are you drinking half pints and not pints?”

“Well I guess it seems more lady-like” I say.

But then tell the story that when my daughter Katie had asked what I drink when I go out on a girls night and I told her the same thing … she said I ought to tell a few of her friends that.

Dawn agrees with me though … half pints are much more lady like.

Emma vows to have a pint when the next drinks are ordered.

I’m not sure if Annette or Dawn gets them. But sure enough, Emma has a pint.

She looks at my red lips and asks if I’ve got the lippy with me still.

“I’ve never tried red like that before” she says. “Will you put some on for me?”

At this point I think it wise to warn her that I’ve never put lippy on anyone else's lips … not ever … and she could end up looking a little clown-like.

“I’ll take the risk” she smiles.

I take my glasses off'. And I think I’m more nervous than Emma as I start painting the bright red liquid.

Here’s the result. It’s a lot harder to paint someone else’s lips. Honest.

“You look a lot better without your glasses … you should keep them off” she says.

Then everyone seems to be trying them on. 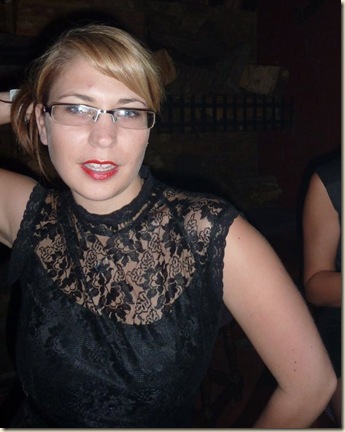 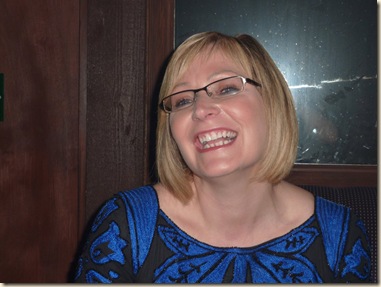 No one can see a thing through them and they make their way into my handbag.

As time passes the drinks have an effect and a trip to the the ladies is needed.

“Come on then” she says. Emma and Dawn head for the stairs taking a hold of my hand and drawing me along.

Another difference between a girls visit to the bathroom and a boys visit is that boys tend to get in there and then get out. To girls it’s a networking opportunity. And it’s almost a must to powder your nose or gloss your lips or brush your hair.

We brush hair a while.

Back up the stairs we step outside a while for a cigarette break. I just take the opportunity to chat some more.

It’s a cold night … but there are log fires.

A friendly couple take a picture of Emma, me and Dawn. I think I should have powdered my nose while I was brushing my hair. 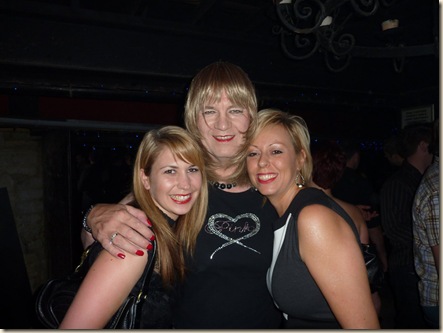 Back upstairs and we continue talking.

It was at one such visit … on the way out … lagging a few yards behind Tina and Emma … the place is a little crowded and there’s a group of girls waiting in an orderly kind of line.

“Hi” says one girl as I mosey along towards the exit.

She introduces herself and I introduce myself.

“I was just admiring your shirt” she says.

“Well … to be honest … it was your boobs I was admiring.” she smiles.

Not the smartest response, I know.

She smiles and looks me in the eye.

Places a hand firmly on each boob and begins to jiggle them around.

Like I said … the ladies room is on a totally different planet than the gents.

Back upstairs again and a kindly couple take a group picture. 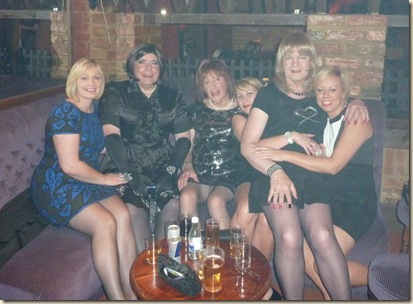 A little more dancing and talking.

Dawn says Emma and I look like sisters … similar hair.

A little before 3:00 am Emma, Annette and Dawn head away. We say our farewells. They are such lovely people!

Kim drops by to say hi. She’s at the front of the Pink Punters picture below: 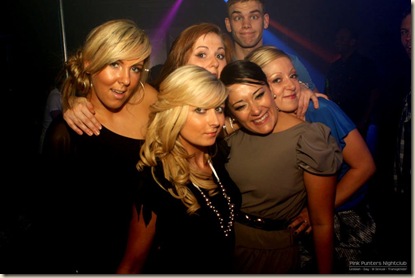 We talk a while. Like a lot of girls that I’ve talked to here she says she likes the place because you can dance … talk … have a great time … and there’s no trouble … no fighting … just people allowing themselves to be themselves.

Anna (on the left in the picture) sits with us a while.

We all head downstairs for another dance … the music is more my kinda style at the moment … a little more oldie-worldie … re-makes of YMCA and  stuff like that.

It’s nice not to have to struggle down and up the ditch.

The end to a really nice evening.

Just had to let you know how great you look in the pics from the last couple of posts! Someday I hope to be brave enough to venture out dressed!

Hi Dani and thank you. I know you'll love the experience!