The Christmas before last Sally gave me a gift voucher for Femesque.

I’ve met Lynne, who runs Femesque (and also a hair Salon), a couple of times before at the Surrey Swans ... you can read all about one of those events here.

I booked a Makeup Training lesson. That’s a lesson on how to put on makeup as opposed to a marriage guidance kind of thing.

I’ve been applying makeup for quite a few years now. But, like many people I guess, I have a tendency to stick with what I know. So I thought it would be useful to pick up some new tips.

I booked for 11:00 am until 1:00 pm and thought it would be a good plan to take the makeup that I currently use and get some feedback on that.

Friday night at about 8:00 pm I begin to prepare.

Collecting together things in my makeup bag.

Foundation. A couple of Kryolan TV Sticks that I bought from Charles Fox a while back as recorded here … and Max Factor that I usually use these days. Max Factor and Stargazer eye shadow along with some unbranded shadow and blush that I bought from Doreen’s Fashions. Kryolan Translucent powder. Rimmel lipstick and Maybelline lip paint. Rimmel eye liner. A small collection of brushes.

And then what to wear?

Still makes me smile thinking of the relative “complexity” of my life as a girl compared with that of a guy.

Saturday morning and it’s time to shower and shave and pack everything away.

An un-lady-like rucksack and a small carry case are loaded into the car.

Femesque are based in Aldershot ... about 40 minutes drive from Windsor. So at a little after 10:00 I set off in male-mode, planning to return en-femme.

The Sat Nav delivers me to the correct street a little before 11:00. I didn’t need the map that I printed out. But I have a suspicion that the day I don’t bother to print a map, is the day that the Sat Nav will all fall apart.

But I only need to get to the house just beyond the sign.

No space in the driveway but no problem ... plenty of space along the roadside.

Collecting my bags I head for the door and ring the bell.

The door opens and I’m welcomed in.

People are very welcoming and friendly.

I take a seat and in just a minute or two Michelle introduces herself to me.

She’s a lovely lady from the Kilmarnock area of Scotland.

We talk a bit and I explain a little of what I’m looking for. A little like Bono and most everyone else I know ... I still haven’t found it.

We talk as I get changed.

I still remember my first ever makeup and re-reading about that brings back many sweet memories. At that time things that then seemed strangely normal in a weird sort of way, now just feel normal.

A new friend of mine, Rachel, has recently visited Femesque a couple of times. I know it was her first visit to such a place and, though she was quite nervous, she was made to feel really welcome and relaxed, just as I was. She enjoyed the whole experience enormously.

Michelle is a great teacher.

Because I’m not a newcomer to makeup it’s not alien to me.

The plan is that she will make up one side of my face and I’ll do the other.

When I told Laura about this she thought it sounded like a real giggle: 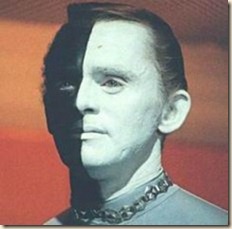 And that was how it went. Unrushed and with explanations as to what was happening and why.

Michelle is a bit long sited and so put her specs on to add makeup to my face and took them off to see me in the mirror.

There’s a lot involved. These days I understand why ladies sometimes have a reputation of hogging the bathroom for hours before they go out. I know that I do.

Michelle is really good at explaining things though and taking things step by step. Making sure that I have the opportunity to try out everything that she explains and does. Checking that it’s making sense and I’m happy with it all.

The sequence is pretty similar to the sequence that I do things in. I remember in my early days I had a list of what to do and what order to do it in.

She has a whole lot of brushes and cosmetics, but since I brought a whole collection of cosmetics with me says that she’ll make use of them if I’d like.

First, something to help conceal the greyness caused by the beginnings of beard growth that sometimes can be a nuisance to t-girls. She notices that I have some non-shiny red lipstick. Paints a bit of it onto the back of her hand with a brush and then dabs a very thin layer onto parts of my chin and under my nose. The red will help conceal. I do the same on the other side of my face. I look as though I’ve been smooched. 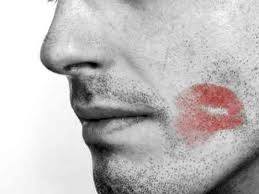 And no. That’s not me. And the smooches were more like painted smudges.

Next comes some Max Factor foundation. Applied with a brush. It’s “thinner” than the TV Stick, but blends with it well. We tg’s typically need more foundation lower down on the face, and less further up. All part of the hide the potential beard kind of thing.

I hadn’t realised how easy it is to mix the different types and shades of foundation and have it all still work. Obvious really I guess.

Next it’s the eyes.

Michelle talks a bit about the shape of my eyes, my forehead and my brows. Different shades and patterns suit different shapes of faces. It’s about using the shades and tones to create an illusion. To emphasise some things and de-emphasise others. And it’s different for different people.

The whole experience is a lot of fun and educational as well. I learned things and also was re-assured in the sense that I hadn’t been doing anything too odd myself.

Lynne called in to say hello ... it seems that next week they have a TV (as in television) crew filming a makeover as part of a programme.

At the end of February Lynne and Michelle are making a guest appearance at Surrey Swans ... with a makeover and hair theme. They think they’ll need a volunteer. I promised to be the volunteer if no one else would.

I bought a collection of brushes, so I now have at least one for every occasion.

Having arrived as a guy with a bag full of girl clothes, I pick up my bags of guy clothes, and happily set off home as a girl.

I know quite a few other t-girls that have visited Femesque over the past few years. And like all of them I had a great time!