A visit to Guildford Police Station

May 31st was the day a group of us from Surrey Swans set for a visit to Guildford Police Station.

In April I’d received an email from Robin, who works there asking if I’d be prepared to visit them and talk about Transgender issues and how they could assist us should we come into contact with the police.

Robin also mentioned that it would be fine if other people came along as well and said that things that would be useful to talk about were things like:

We agreed on a date of May 31st and ‘Chelle, Linda, Rose, Amanda and Cynthia said that they’d like to come along as well.

In the event, work commitments meant that Cynthia couldn’t make it.

I’d spent a while thinking about what I’d like say and wrote it down to try and estimate how long it would take to say it, and to try and keep myself from running off at tangents.

I was keen, as well, to provide some tome for everyone else to share some of their own thoughts and experiences.

We met at the Friary shopping centre in Guildford at about 11:00 am for coffee and a chat, and then headed for the police station to arrive there at about 11:50 … it’s a short 10 minute walk. We were met by Robin. Spent a few minutes signing in and headed up to the meeting room on the 7th floor.

Almost 30 people turned up to listen to us. We were a bit surprised. And impressed as well, that so many people would give up their own time to coma along and listen to us.

We spent a little over 30 minutes sharing thoughts and experiences. And had a lovely response from people afterwards.

Hermann, one of the officers at Surrey Police (the tall one in the picture) spent some time sharing about the way that their work is about safeguarding and assisting people.

We spent quite a while eating bread rolls and soup and chatting. It was especially good in that lots of people (including we five visitors) said it had been a useful time and that we’d learned important things.

For me, and I believe also for others, it had been a really valuable time.

Here’s a picture taken after the the talking and before the soup and bread rolls: 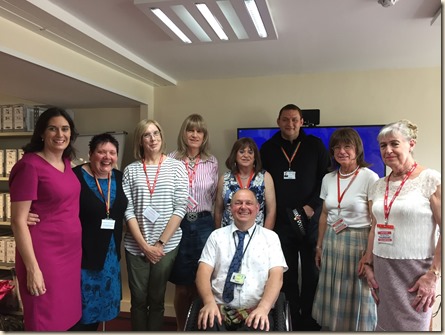 If you’re interested in the kind of things that we said, then here is some of it:

Robin (front centre in the picture) introduced us and explained a bit about what we were likely to be talking about.

The script that I worked from was this:

A definition of Transgender / Trans is that it is an umbrella term used to cover numerous types of gender identity such as:

You know though, whatever trans is:

My story … which is different from everyone else’s

Childhood, which was a long time ago. I remember:

Growing up, as a student and then later, I remember

Linda, Rose and Amanda then shared some of their thoughts and experiences.

And a few more points to finish:·

In common with other people:

We (all people, not just trans people) mostly just want to be free to be ourselves.

So, in dealing with trans people, as with anyone else, it’s great, whenever possible, to:

And we, on our part, will try to do all of these things when we meet you, because we know that you are people just as much as we are

And finally from me:

Chelle then shared some thoughts and experiences. She also raised a question as to the kind of definition of “trans” that the police use when safeguarding trans people. We were reassured that the definition is the same one that we talked about near the beginning of the session.