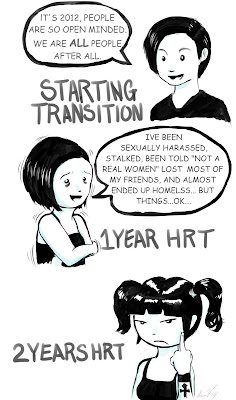 On Friday 13 September 2019 the first in the list of Trans News items on the Google News page is from the BBC: Transgender waiting lists 'putting people at risk'.
The article discusses how long people that identify as being Transgender sometimes have to wait before receiving any specialist medical help.
It begins with the words:


Transgender people are being put at greater risk of suicide and self-harm because of "unacceptably" long waits for specialist medical clinics in Scotland, according to campaigners.

The Scottish Trans Alliance (STA) (which has been funded by the Scottish Government Equality Unit since 2007) is mentioned in several places in the article.
The article also mentions that:


At the start of 2019, almost 300 people had been waiting more than a year for a first appointment with a specialist.
NHS guidelines say gender dysphoria is a condition where a person experiences discomfort or distress because there is a mismatch between their biological sex and gender identity.
The condition is not covered by the NHS's 18-weeks referral-to-treatment target but the STA thinks the first appointment with a specialist should be within that timescale, because delays can take a "real toll" in terms of depression and anxiety.

The article also includes an analysis by BBC Scotland Health Correspondent Lisa Summers.
The analysis includes some of the story of some of the experiences of a trans man named Alex McIntosh. And also Dr Jo Gardiner, a GP who has seen a growing number of transgender patients.
James Morton of the STA mentions:


The long waits to begin hormone therapy in particular can put people at greater risk of hate crime.
If you're trying to live in your gender identity in society, but you haven't been able to access hormones or surgery, then your physical appearance is more likely to indicate you are trans.
So it can create a high level of risk in social situations and take a real toll in terms of depression and anxiety.

And my thoughts?
The National Health Service (NHS) in the UK is under pressure from many sides. It's has a difficult job to do in balancing funding with meeting the needs of people. Over recent years there has been quite a lot written and said about failings in the provision of mental health care. For example there's an article in the Guardian here, and from the Parliamentary and Health Service Ombudsman here.
There's an article in the Lancet entitled Trans* health: “diversity, not pathology which mentions:


“Being transsexual, transgender, or gender non-conforming is a matter of diversity, not pathology”. This statement is from The World Professional Association for Transgender Health (WPATH) Standards of Care, 2011 guidelines, which provide clinical guidance for health professionals and challenge medical classification that has long considered gender identity disorder, a term that has largely been replaced by gender dysphoria, to be a mental health problem.
As WPATH point out, “some people experience gender dysphoria at such a level that the distress meets criteria for a formal diagnosis that might be classified as a mental disorder.” However, gender dysphoria is not caused by psychopathology or mental illness, but is mainly an issue with identity. Misdiagnosis, or simply overlooking gender dysphoria is misleading, unhelpful, and harmful. Not only does it compound social stigma but it also misinforms the medical profession. Gender dysphoria is not a mental illness; however, internal biological conflicts—a yearning to live in the gender role dictated by the brain, not the genital sex, or phenotype—might lead to a mental health diagnosis.

According to this article in The Independent


The World Health Organisation (WHO) no longer categorises being transgender as a "mental disorder".
On Saturday 25 May [2019], the health agency approved an update to its International Statistical Classification of Diseases and Related Health Problems (ICD-11), a manual used globally to diagnose diseases.
The decision to remove transgender identities from the ICD-11's classification of mental disorders was announced by WHO in June last year.
The update has now been approved via a vote held by the World Health Assembly, the WHO's governing body which represents the organisation's 194 member states.
The changes to the health manual will come into effect on 1 January 2022.

The view is that to be transgender is not to have a mental illness.
Having said that, to be trans and to have to  hide the fact can cause distress. And sometimes that distress can be so great that it can lead to mental health issues.
It's vital that the NHS either invests more in making specialist help available to people that identify and being trans much sooner than seems to be the case at the moment, or changes the way that services are provided so that GPs are able to offer better support.
To be honest, though, probably both of these are needed.
By Andrea at September 13, 2019