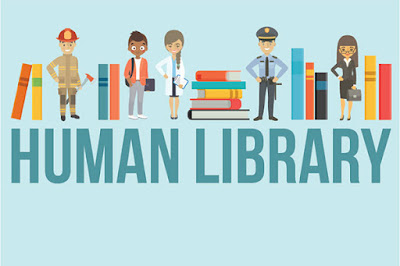 I prepared some notes ... see below ... though I didn't actually use them on the day. But a lot of the things that I shared are included in the notes.

Sally and I arrived at about 10:30 and spent a while drinking coffee, chatting with other human books, librarians and organisers and hearing about how things had been organised.

I was first borrowed at about 11:15 and made it back to the human book shelf at about 14:10, so it was quite busy. Each borrower had about 10 minutes ... though it was often a bit longer than that because there were always a few questions.

Mostly I was on loan to one or two borrowers at any one time, though there were three at the very end.

I found it to be a very positive experience.


Gender Fluidity: My life as Andy and Andrea