It’s that time of year again. As I take my lunchtime stroll there are bushes overflowing with fruit. It hangs heavily on their branches. The grey footpath is littered with yellow and red.

Each year I think … how extravagant nature is. Or is it wasteful? Or is it so harsh and cruel that there needs to be an over-abundance of fruit … just so that a few survive.

I guess until relatively recently it was the same with people.

A thought that has crossed my mind several times over the past few months is the idea that I should revisit the concept of God.

There was a time that God was a person to me. That Christianity was a relationship … a friendship … much more than it was a religion.

This was all based on the “evangelical” kind of view that the Bible is the final authority on all matters. And, what I now believe to be incorrect, a feeling that there was some kind of definitive logic in the way that evangelicals … the kind of person that I was … interpreted and understood the Bible. That there was some kind of objective and unbiased view that represented the truth.

And yet … there isn’t. We all bring our preconceptions and prejudices. The things that influence what we accept as fact and truth … and those things that need to be “interpreted”, discussed and disregarded.

My friend Dani recently left a comment on a blog posting that I made a while ago … it’s here. Reading the article that Dani mentioned led me on to some more searching around … and there is this … Proof that fundamentalists selectively quote the Bible. It’s worth reading. It makes it clear that if you you are Christian and have hang-ups about Gay or Lesbian people then you should also steer well clear of shrimps and be careful how you shave.

Really I knew this all along.

One of the first “Christian” Books I ever read was a thing by Francis Schaeffer called Genesis in Space and Time. It had a title that intrigued me.

It’s intelligently written … but even then as a new Christian … I wondered why Francis Schaffer was adamant that it was important that there was a literal Adam and Eve … and yet the eating of the fruit in the Garden of Eden was an allegory.

At the time I guess I though that he knew better than me.

In fact, really, I think it’s about what we choose to believe … which then influences how we interpret these things.

Emily Saliers … an Indigo Girl just in case you didn’t know … put it like this in her song Deconstruction:

We talked up all night and came to no conclusion
We started a fight that ended in silent confusion
And as we sat stuck you could hear the trash truck
Making its way through the neighbourhood
Picking up the thrown out different from house to house
We get to decide what we think is no good
We're sculpted from youth, the chipping away makes me weary
And as for the truth it seems like we just pick a theory
The one that justifies our daily lives
And backs us with quiver and arrows
To protect openings cause when the warring begins
How quickly the wide open narrows
Into the smallness of our deconstruction of love
We thought it was changing, but it never was
It's just the same as it ever was

The song is here: 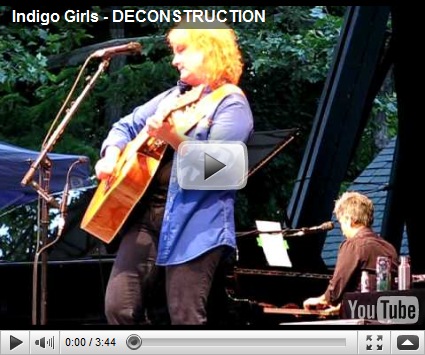 Life is a subjective kind of thing.

My plan is to try revisiting some of the places that I’ve been before but with an acceptance that it is ok … inevitable even … to have a subjective view on the stuff. That it’s ok not to see it all from an evangelical perspective.

I don’t know where this will lead me. Though I know there is no going back to where I used to be.

Tonight I read through I Corinthians Chapter 13.  It’s here. And I have to say … it’;s hard to disagree with any of it.

I remember, many years ago, someone saying it’s an interesting exercise to take these words:

It does not envy,

it does not boast,

it is not proud.

It is not rude,

it is not self-seeking,

it is not easily angered,

it keeps no record of wrongs.

Love does not delight in evil but rejoices with the truth.

And wherever it says love or it try substituting with the word I.

And even today, if I do that, I’m left with the feeling … I wish.

So now … though I don’t know where this is leading or what I’m looking for … it’s true to say that even without a belief in God … and in the certainty that I disagree wholeheartedly with the views that some Christians have … the Bible does say some things that are worth listening to.

And now I need a break … so it’s out with the nail file.

Andrea,
Great post, I came across the idea of changing Love to I in the Corinthians passage a while back too. I think it would be a wonderful philosophy for life but I know that I fall far from it. Maybe one day I'll get closer to it.

I'm glad you read that comment and the link, Andrea. That passage from Corinthians is a fave of mine...and I think the whole point is that you SHOULD be able to replace "love" with "I". At least, every Christian should strive to be able to do it (we all fail to do it all the time, of course--we're human).

To me, the whole point of being a Christian is love--love of life, love of other humans, love of all Creation. "God so loved the world...." "They will know we are Christians by our love..." "You shall love God with all your heart...and your neighbor as yourself." Christ said that all the Law and the prophets hang on that last...and that you cannot love God if you do not love your neighbor.

One of those things that has a ring of truth about it though.