The weekend of July 9th, 10th and 11th was Sparkle (Sparkle). This is my third visit.

I arrived at Tina’s at about 08:45 on the Friday morning and we set of for Manchester pretty soon after that. Both in “male mode”.

As always, the amount of stuff packed for a mere two nights away could be viewed as being somewhat excessive. But you never know what you might need.

The traffic was pretty light and we arrived at the Premiere Inn on Portland Street at about 1:15. The girls working at the hotel reception asked about what had brought us to Manchester and we talked about Sparkle for a while. We promised to say hi on our way out later after we’d had a chance to get changed and made up.

We parked the cat in the NCP Car Park on Oxford Street assuming that we wouldn’t see it again until Sunday.

Stepping out of the lift (elevator) on the ground floor I realised I might get to see it a little sooner. The hotel key-card was sitting on the top of the dashboard still.

Eventually, back at the hotel we began to change.

I sent a text to Laura and Billie to say we’d arrived and which room we were in.

The usual make up and getting dressed routine. Complicated a little by the warm weather and the fact that the air cooling system wasn’t cooling the air very much. Foundation goes on a lot more easily without perspiration.

Tina was ready before me and set off to meet up with a friend that was staying at the Britannia Hotel a little way along Portland Street. We aimed to meet each other at the Rembrandt Hotel on Canal Street where the Welcome to Sparkle reception was taking place.

Eventually I was ready and set off … a wave towards reception and a short walk down Portland Street taking a right turn into Chorlton Street.

Most people don’t notice me at all. A few look at me a little, but pay no real attention.

As I reach Canal Street and think about whether to head left or right to get to The Rembrandt I see Tina and a couple of girls and I rediscover that it’s a right turn.

We chat and walk and arrive at the Rembrandt in just a few minutes.

Tina and I head upstairs, say hello and pick up a few leaflets.

It’s very hot up there so we head downstairs to buy a drink.

A girl  at the bar says she likes my perfume.

We head outside. There’s just one table free … with only a single chair.

I talk Tina into sitting down … and within a couple of minutes a guy from a nearby table spots that there is a spare chair and brings it over to me. It’s quite sweet sometimes …  the difference that wearing a dress can make. Here’s the view form where we are sitting. 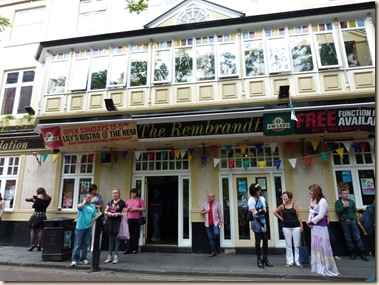 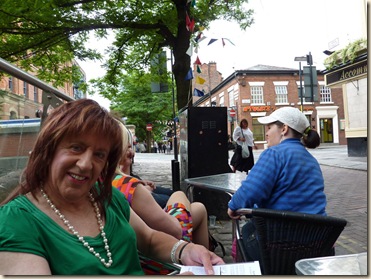 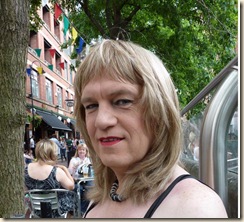 Laura phones … she and Billie were delayed … but are almost here.

We head back to the hotel to get ready for the evening and to meet up with them.

Email ThisBlogThis!Share to TwitterShare to FacebookShare to Pinterest
Labels: Sparkle