A Street, a Brummie and a Bisexual

A few weeks ago I began to watch the TV programme The Street on the BBC (http://www.bbc.co.uk/drama/thestreet/).

The first episode that I saw was by accident … it happened to be on whilst I was channel hopping. Timothy Spall was one of the actors … ever since Auf Wiedersehen Pet (http://www.aufpet.com/) I’ve enjoyed the kind of programme that he seems to get involved with … so I watched it … and then the following two episodes. 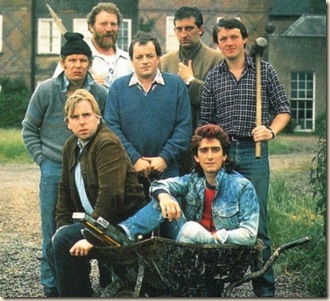 By a process of elimination you may be able to work out who is he … even if you never heard of the programmes.

And OMG … he was born in London … I had thought he really was a Brummie (http://en.wikipedia.org/wiki/Brummie).

Another guy was working away from home … discovering that he is bisexual were.

Both kind of captivating episodes.

Things that happen and peoples reactions to them. Some things going wrong or being done wrong. Trying to make things right again. In the end, in both stories, deception led to honesty. The honesty wasn’t an easy place to get to nor to be at. But it was better than the deception. There is truth in this.

Prior to the bisexual guy’s discovery of his bisexuality, his first response to the advances made by another man was one of abhorrence … I’m 100%!  … he protests.

On visiting a gay bar he is attacked and robbed. The animal that does the robbery seems to be very 100%. Disgusted by homosexuality. Not too worried about the idea of theft. Happy to smash skulls.

His wife is suspicious that things have happened … and … as time passes he admits the truth.

He tells his wife … I’m not different than I was … I’m the same man.

Is wife says … If it was another woman I could understand it. I could compete … the way I dress … the things I do. But I don’t know how to compete with a man.

The father maintains that no one is 100%. Everyone is bisexual … there are just degrees.

I haven’t been in this position, but I’ve heard people say these things, and in different contexts I’ve said similar things.

The thoughts are just thoughts … not facts … I haven’t even checked them out with Wikipedia.